NOTE: The information below relates to the Nyrius models available in the U.S. Model availability, price and features may differ in other locations. 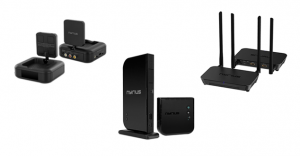 With wireless being the norm for so many of our electronic devices today, it’s pretty surprising to me that the standard way to connect a cable box to your TV is still with physical cables. And the surprise turns into annoyance when I want to put a TV in a room where I don’t have a cable outlet.

I had this situation when I bought my current house. I wanted to put a TV in my living room but there was no outlet there and neither option for putting one in—running the wires along the ceiling and floorboards inside the house or running them over the roof on the outside—was desirable.

Note: I’m using the term “cable” to mean any provider of TV services, including satellite and telecom companies.

Fortunately, after doing some research, I found the Nyrius 6-Channel Wireless Audio/Video Transmitter & Receiver System, which sends the cable signal wirelessly from the cable box in my bedroom to my living room TV. Since then, I’ve upgraded my system from the GS3200 model, which has a single input and doesn’t carry HD signals, to the Aries Home+ model, which does support HD and has two inputs.

The value of the second input is that you can use these same devices to transmit signals wirelessly from other types of audio and video equipment as well, e.g. DVD/Blu-ray players, streaming media devices, music systems, gaming consoles, etc. I have my transmitter set up with the cable box as one input and a Roku streaming player as the other.

Note: These systems can also be useful even if you have them in the same room as your TV, but connecting devices with a cable isn’t ideal, e.g. if the TV is mounted on the wall or on a stand that doesn’t have room for the cable box.

Thanks to T4L reader Michael who asked whether you can use one of these systems with an antenna, like if you have one in your attic and don’t want to run cables down to your TV. The answer is yes! However, if your antenna doesn’t have an HDMI or A/V connection (and I think most of them don’t), you’ll need to connect it to a converter box or DVR that does have one. Here are a few examples from Amazon with varying features (and costs). Note that some of them may require external storage devices if you want to use them to record shows.

So you connect the antenna’s coaxial cable to the converter/DVR, then use HDMI or A/V cables to connect the box to the wireless transmitter. The same caveats about the effectiveness of these systems being dependent on what’s in-between the transmitter and the receiver still applies.

Mouse over the product link to see the current price at Amazon and click through for full specs and customer reviews.

One of the questions that comes up a lot with these types of systems is how do you control A/V devices from another room (e.g. change the channel on your cable box)? That’s where the IR extender comes in.

The IR extender is a thin cable that plugs into the Nyrius transmitter and has one or more small blocks on it. You position the block close to and in front of the device’s infrared light (hence “IR”). Then when you point the device’s own remote at the Nyrius receiver unit, which is connected to the IR extender, you can operate the device just as if you were pointing the remote at it directly.

The extender can be rather finicky and if I couldn’t get it to work at a particular time, I used to have to go change the channel in the room where the box was. Now, however, I have an app for my phone that I can use as a remote so I don’t even bother with the extender. My current provider is Comcast Xfinity Verizon FIOS, but I imagine most of the major cable/satellite/telecom companies also provide apps to control their boxes now as well. Also, a lot of cable remotes don’t require direct line of sight anymore, so they may work even without the extender or the app.

When I got my first system, I immediately fell in love with it. I had no problems with the signal, even going through multiple walls and doors and the picture was really clear and stable. At one point, when I switched from Comcast to Verizon FIOS, I moved the box to my basement, which also has an outlet, and sent the signal from there—also without problems. The only time there was any issue was when someone was walking across the line the signal was traveling and the picture would break up a little. But since that person was usually me, it wasn’t really a problem since if I was walking, I wasn’t watching TV… 🙂

But then when I switched back to Comcast (don’t ask!) I originally only set up the bedroom outlet and so I had to bring the Nyrius transmitter back up there as well. Only this time I found it harder to get a clear signal. Likewise, when I got the HD model, I had more difficulty getting the units to pair with each other and I would also lose the signal at some points. I’m not sure what caused these issues as there were several variables involved: different cable provider, different box manufacturer, closeness to my wireless router, things changing between my bedroom and my living room that may have had an impact, etc…

Then I decided to activate my basement outlet again (mainly so I could move my router down there and get those freakin’ flashing lights out of my bedroom!) and I put the HD transmitter down there to see what would happen. Lo and behold, I had no trouble pairing the units. And so far (fingers crossed) the signal seems to be holding steady.

I’m now back to FIOS again (!) but I’m not using the transmitter at the moment because I can get what I need through streaming media players now. 🙂

So all that to say that I have been very happy with this system when I was using it—the picture and sound quality from the HD model is excellent—but there’s really no way to know if it’s going to work with your own setup until you try it out yourself.