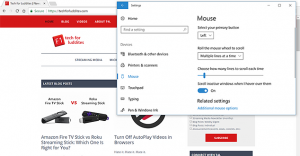 To deliberately change your scroll settings: 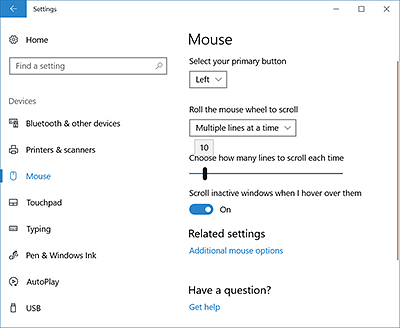 Note: This setting also applies if you use scrolling gestures on a laptop’s touchpad, but doesn’t affect how using a window’s scrollbar works.

There’s another scroll option on this page called “Scroll inactive windows when I hover over them.” I had no idea what this was for, so I did some searching and discovered that it’s something that didn’t exist before Windows 10 but that Macs had, so a lot of people who had switched to a Windows PC really wanted this feature.

In my case, I would rarely need this setting because I always keep all my windows fully maximized so I generally don’t have inactive windows showing on screen (an inactive window is any window that isn’t the one currently being used).

However, I discovered it actually helped when I was trying to decide how many lines I wanted to scroll at a time. I kept the Settings dialog box in focus with my browser behind it and as I moved the slider for the number of lines, I could just hover over the browser to test that setting.

Turn Off Unwanted Sounds in Windows 10

Take Screenshots of Your Computer and Mobile Devices