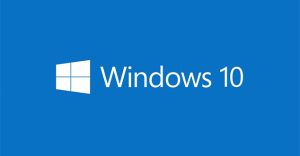 When Microsoft introduced Windows 8 back in 2012, they also introduced a whole slew of apps that came pre-installed or that you could purchase from the Windows Store. These apps are more like ones you install on your smartphone or tablet than the desktop applications you used to install from .exe files on CDs (or downloaded from a software company’s website). But you could still install the latter, making your system a hybrid of traditional programs and new apps. Windows 10 continues this hybrid model, which isn’t a bad thing since it lets you choose which version of each program you prefer to work with.

The problem arises when there’s a Windows 10 app that does the same basic function (e.g. email, graphic design, video player etc.) as a traditional program and decides to make its own app the default for opening and using those files.

What do I mean by default programs?

The best example for me is Microsoft’s Reader app for reading PDF files. I prefer to use Adobe Acrobat (or Adobe Reader if I’m on a computer where Acrobat isn’t installed) to read PDFs because I’m more familiar with it. And while I can just open Acrobat and then browse for the PDF file I want to read/work on, there are times when I just double-click on a PDF file to open it, e.g. when I get a PDF attachment in an email or from a link on a website.

When I did that before it would automatically open Acrobat, but after I installed Windows 8 and then 10, it opened Microsoft’s Reader app instead. That app would also open automatically when I create a PDF file from another program like Word.

And it’s not just Reader. Most of the defaults are set to built-in Microsoft apps instead of third-party programs that you may prefer, e.g. the Edge browser instead of Firefox, Chrome, Safari, etc. And it even happens with Microsoft’s own standalone programs—for example, I use Outlook for email but the default for Windows 10 is its Mail app.

Note: The following instructions will only work if you have the program installed locally on your computer. If you’re using a cloud-based version of a program —including Microsoft’s own Office 365 applications— there doesn’t seem to be any way to make those the default. Update: I’ve since discovered that even though I’m using Office 365 (version 2016), I do have a local version of the program as well, but it does require one of the steps outlined further down this post to make it the default.

There are two ways you can change what program opens by default for any given file type.

After a few letters, “Default Programs” will appear in the search results. Click that. 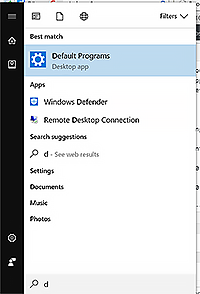 The window that opens has a few of the more popular apps listed, like email and browser, but not one for opening PDF files.

Scroll down and click the Choose Default Apps by File Type link. 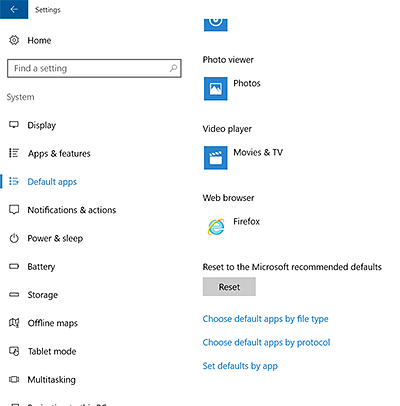 A screen will appear listing all the different file types and the default programs they’re currently associated with.

Scroll down to the file type for which you want to change the default program. 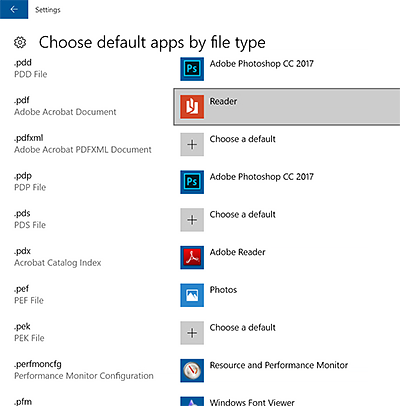 A menu will open up that lets you select from programs installed on your computer that can open that file type.

NOTE: If the one you want isn’t listed, you can scroll down and click the link to look for a new app in the Windows Store. 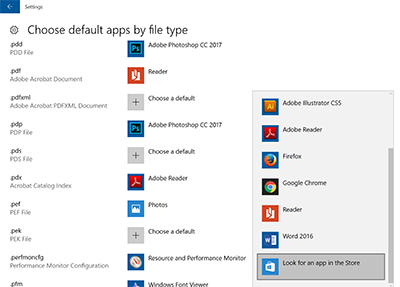 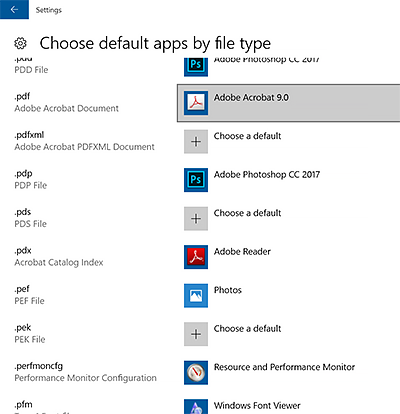 Now when I double-click on the PDF file in my email, Adobe Acrobat automatically launches instead of Microsoft Reader.

The process above has one major limitation. Sometimes the program you want isn’t already listed in the dropdown menu and if it’s not a Windows Store app, you’re stuck. In that case, we can go back to a classic Windows tool: Control Panel.

UPDATE: Thanks to several readers for bringing this to my attention, but unfortunately it looks like Microsoft has found a way to eliminate the Control Panel workaround as well as one I had explained previously using the Run command to get to the old File Association screen by having the relevant screens redirect to the standard Settings page. I have no idea why they’re so dead set against people choosing the programs they want as their defaults but they keep picking off solutions one by one. *sigh*

I have a few final options to try that have worked for me to switch the default from Word 2016 (from Office 365) to Word 2010 and back again. I make no guarantees they will work for other applications or even these ones for everybody, but they’re worth a try, at least until Microsoft decides to break them as well…

Use the Open With command.

In File Explorer, right-click on a file whose default program you want to change. Select Open With > Choose Another App. 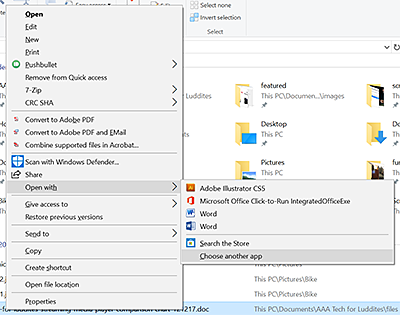 Check the box that says “Always use this app to open .[file extension] files.” If the program you want to use is displayed, select it and click OK. 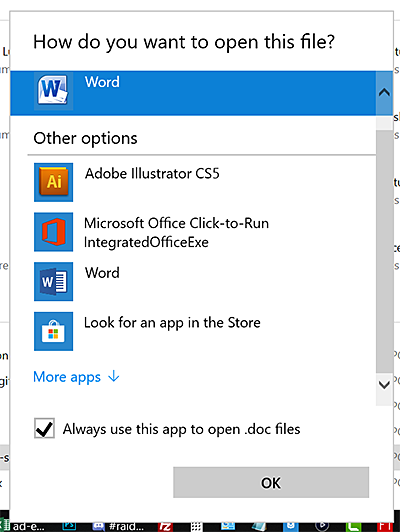 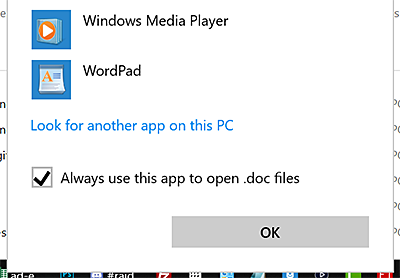 That will open a dialog box that will let you drill down to find the .exe file for the application you want to make the default. 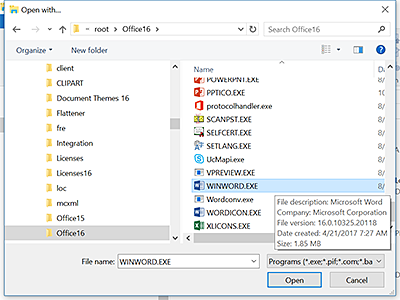 NOTE: When the Browse dialog opens, it may automatically start at the Program Files folder on your computer. Depending on the application you want, you may have to go up a level to the Program Files (x86) folder and find your .exe file under that path.

Also, some .exe files can have really weird paths that make them hard to find. For example, here are my paths for Word 2010 and Word 2016 respectively:

Use the Program Repair Function

This is what has worked for me with the two different versions of Word I have. I “repaired” the one I want as the default and that seems to make it the priority of the two of them. And once I repaired both programs, they now both show up in the list of Open With apps so I can more easily switch between them again.

To get to the repair feature, click the Windows button and start typing “Apps & features” until it appears in the search results.

Click it to go to that screen, then on the right-hand side under Related Settings, click on Programs & Features. 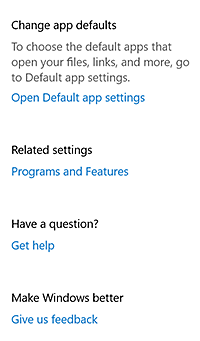 That will bring you to the Control Panel screen where you can select the program you want to make the default. Click change and follow the instructions to repair the program (they will be different depending on the application). 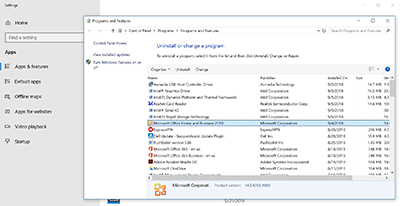 Uninstall and Reinstall the Program

This is obviously the option of last resort but if nothing else works, it’s worth trying to reinstall the program you want to be the default. Originally I only had Word 16 on this computer, but when I installed Word 2010, it became the default. The Repair option above is what let me switch back and forth between these two versions without having to reinstall again.

Select the program you want to be the default.

Occasionally you may find yourself with a file type that you don’t want to associate with any default program at all but somehow gets one assigned to it. Unfortunately, I have not yet been able to find a way to remove a default that has been set. 🙁

A T4L reader commented below that in Windows XP (aka Microsoft’s Best Operating System Ever) you could set different programs for opening a file vs. editing it. You can’t do it easily in Windows 10, but I did find one article that shows how to change the program for the Edit menu for one application by editing a registry entry. I haven’t tested it myself and you always have to be careful when making changes to the registry, but if you need to do this, you can check it out to see if it will work for your purposes:

How to Use the Windows Right-Click ‘Edit’ to Launch Photoshop Instead of MS Paint (TekRevue, 08/07/15)