You may already be aware that earlier this year, Twitter increased the character limit for tweets from 140 to 280. Now they’ve added another new feature that will help users express their more-than-280-characters-required thoughts.

Twitter Threads is the company’s official response to tweetstorms, the unofficial way people have been using the social media site for years. Previously, when people had a lot to say on a particular topic, they would either post multiple tweets with numbers indicating what order to read them in or they would post replies to their original tweet.

Both these options had issues. In the first case, followers’ feeds would be clogged up by multiple subsequent tweets from the same poster. In the second case, other people’s replies would show up in between the posters’, making it harder to read them all in a row.

Threads solves both these problems by letting people write all the tweets first, then post them at once, and just displaying the first few by default with a link to show the full thread for people who want to read the whole thing.

If you're in the mood to post a tweetstorm, this is how to do it using Twitter's new Threads feature. pic.twitter.com/OACbaR4xIv

Posting a thread is simple. When you start to write a tweet, there will be a + button that lets you add a new one to the thread. Once you’re ready to post, click the Tweet All button and Twitter will do the rest. You can even go back at a later time and add more tweets to existing threads. 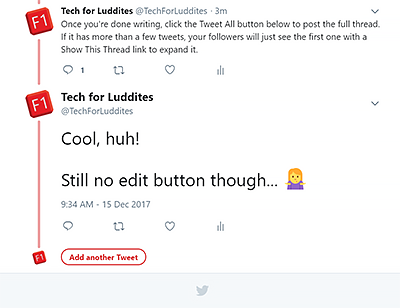 Twitter is rolling out the Threads feature to browser versions as well as Android and iOS apps over the next few weeks.

Filed Under: Apps, Computer, How To, Social Media, Twitter Tagged With: twelve days of tech tips