Communicating anything in 140 characters is difficult enough. But it’s even harder when some of those characters are used up by attachments like images and videos, which Twitter has always treated as text links. Until now.

The company announced back in June 2016 that they were going to stop including certain elements from the character count and today the change has finally begun to roll out to users worldwide.

The elements that will no longer count towards the 140-character limit are photos, GIFs, videos, polls, and Quote Tweets, the feature that lets you attach someone else’s tweet to your own. For example: 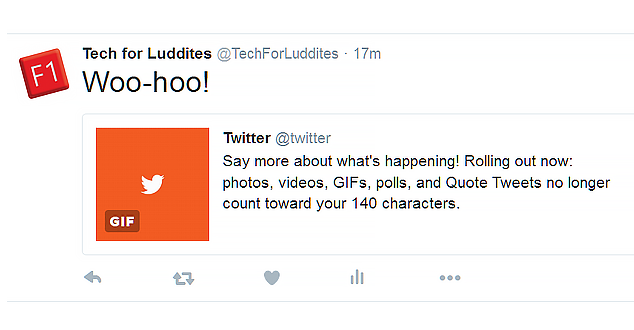 Note that only images and videos uploaded directly to Twitter are excluded from the count. Links to Instagram pics, YouTube videos and other sources will still use up precious characters. Also, Twitter had previously said they would exclude @usernames that begin a tweet (aka “@replies”), but this Verge article is reporting that they’re still working on that: