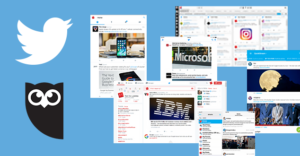 In April 2015, I wrote what I think is my longest post to date at almost 3,500 words (!) that explained the differences between Twitter, TweetDeck, and Hootsuite and offered my recommendations for which was better for managing Twitter accounts in various situations.

When I decided it was probably time to update this post and went back to read it, I discovered there was no “probably” about it. There have been a ton of changes since I wrote the post and at least half of it was no longer accurate. For example, Hootsuite used to not show images expanded in their free version, which was a huge negative, but they do now.

In this update, the first thing to notice is that I’ve taken TweetDeck out of the equation altogether. Back then, it had some major advantages over the other two clients, but the improvements to Twitter and Hootsuite have mostly eliminated those advantages. And those two definitely have benefits over TweetDeck.

Another thing I’m taking out is any reference to the mobile browser versions of the clients. This is when you open a browser on your phone or tablet and go to twitter.com or hootsuite.com instead of using their specific apps. There just aren’t any advantages anymore that would make those the better choice.

So this post will only address the pros and cons of using Twitter and Hootsuite on a desktop browser and on their mobile apps. And instead of doing a head-to-head feature comparison, I’m reorganizing it around different use cases. I think this should be more helpful (and less overwhelming…) when you’re deciding which one you want to use.

Before I get into the specific use cases, here are a few factors that are relevant in all cases. 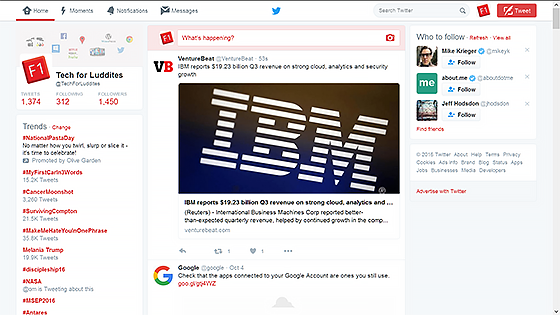 Not surprisingly, Twitter has more features for managing its own product than Hootsuite does. These include Moments and Trending Topics, which I don’t think are that big a loss. But there are two differences that I do think are worth mentioning.

The first is Notifications. On the Twitter website or in the app, you can see all your notifications, which include who has started following you, who has mentioned you in their tweets, and who has retweeted you. With Hootsuite, you can see your mentions, but not who’s following or retweeting you.

The second is Twitter Cards. These are like the previews you get when you share a link in Facebook, with an image, a blurb, and a link. In Twitter, these cards show up fully expanded in your streams. In Hootsuite, they just show up as a text link. This may be a limitation of the Twitter API, i.e. something Hootsuite can’t control, but it’s still a disadvantage for that client.

You can see the difference in the screenshot below of the same post in Twitter and Hootsuite.

When I first wrote the original post, Twitter didn’t expand cards either so there wasn’t really a difference. But as you can see, you’re much more likely to notice the tweet when it has a fully exxpanded card in it. On the other hand, at the moment most people and companies that post tweets don’t use cards, probably because they know a lot of people won’t see them. Instead they just post a photo, which shows up in all the most popular clients, and include the link in the tweet. Pretty much the only time you see them is when someone shares a link to someone else’s website that is coded to generate the card automatically. 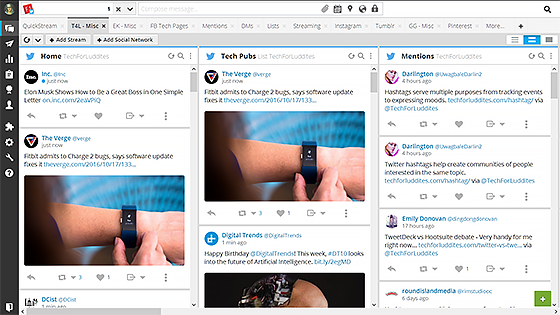 The most obvious advantage of Hootsuite over Twitter is that you can manage multiple Twitter and other social media accounts in one place and group the various streams however you want. So for example, you could have a tab that has several streams from a single Twitter account (e.g. Home, My Tweets, Mentions, Lists, Search Results, etc.) and another tab that has the Home feeds from different social networks (e.g. Twitter, Facebook, Google+, LinkedIn) and another one with pretty much any combination and permutation of streams you want.

NOTE: The free version of Hootsuite only lets you connect three social networks. Those could be three different Twitter accounts or they could be a Facebook profile, Google+ page, and WordPress blog (or any other combination). If you want to manage more than three networks, you need to upgrade to the paid Hootsuite Pro

. The Pro version costs $108/year, has a 30-day free trial, and includes additional benefits over the free version.

The main downside of Hootsuite is that it doesn’t have all the features of any of the networks. Again, this is probably due to API limitations but, for example, while you can track and manage Facebook and Google+ Pages accounts, you can’t access personal profiles for either of those networks, including your own.

So which client is better for you?

Like most technology-related questions, the answer is “It depends.” Here are my recommendations for various situations.

Twitter is the better choice for both desktop and mobile apps, with one exception. If you want to schedule tweets in advance, you’ll need to use Hootsuite. Twitter doesn’t provide that option unless you have an advertising account with them. Why not? Unclear.

But if you just want to write your own tweets and read, reply to, like, and retweet other people’s tweets, then Twitter is your best bet.

On the desktop, I recommend Hootsuite because of how easy it is to customize the user interface to exactly the way you want it.

Additionally, Twitter is a dealbreaker for me because you can’t just switch between accounts once you’re logged into one of them. You always have to log out and then log into the other one. This is probably the single dumbest thing Twitter does, in my opinion. It’s very common for me to see a tweet in one account’s stream that I want to retweet from a different account but it’s a hassle to do so in Twitter. With Hootsuite, you can easily pick which account you want to use to interact with a tweet, regardless of which account you saw it in.

For iOS apps, I recommend Twitter because the Hootsuite app has a left-hand navigation column with all your tabs on it that literally takes up more than a third of your screen space. Unlike on the desktop, the Twitter app does let you switch accounts easily, so I think it’s preferable for iPhones and iPads (with the same scheduling caveat). 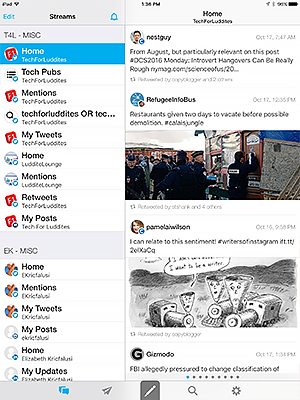 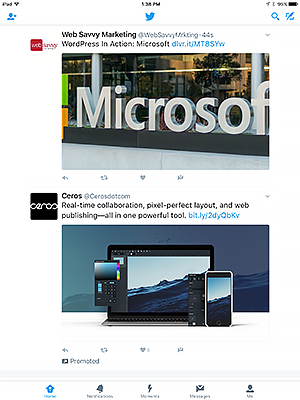 For Android and Fire OS apps, I think it’s a draw. The Hootsuite app has your tabs in a navigation bar across the top, so the actual tweets get to use the full width of the screen. And like the iOS Twitter app, switching between accounts is super easy. So the decision really depends on whether seeing your notifications is more important (Twitter) or scheduling tweets or managing non-Twitter accounts (Hootsuite) is more important to you. And, of course, you may just like one of the interfaces more than the other. 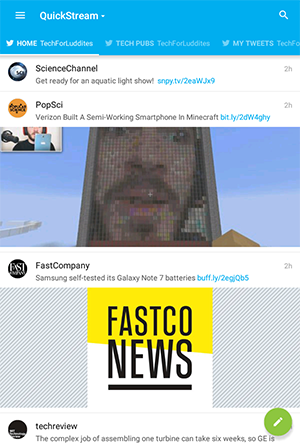 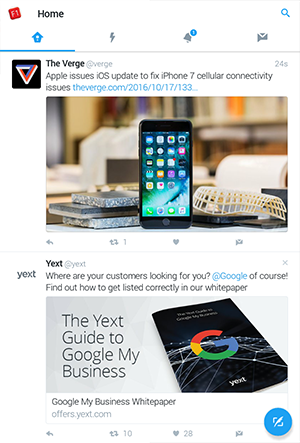 Also, there’s no reason you can’t have both apps on your device so if you need a feature that’s in one but not the other, you have that option available.

A note about support

I’ve had to deal with Hootsuite’s customer support team a few times and in each instance they were very responsive and helped me with whatever I was trying to do. I haven’t had any personal dealings with Twitter support in a long time. Back in the day they were notoriously unhelpful and it’s unfortunately difficult to overcome that perception, but it’s certainly possible that they’ve improved since then.

In both cases, if you do have an issue, your best bet to get help is to tweet to their support team: @Support for Twitter and @Hootsuite_Help for Hootsuite. You can also find tons of Help articles for each company on their websites: Twitter, Hootsuite.

Well, this post is only about 1,300 words, but hopefully they’ve been enough to help you figure out which Twitter client(s) will work best for you!