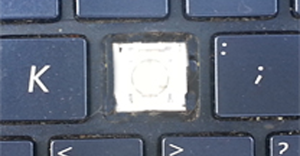 Last year I wrote about how my ASUS laptop, the most expensive computer I ever bought, had the worst customer service. When a key broke off after a few months (and while still under full warranty), they wanted me to send the laptop in to their service center rather than simply send me a new key.

Unfortunately, things only went downhill from there. Several more keys became loose but before they had a chance to fall off, the power cord started fraying and the battery wouldn’t charge anymore. By this point, the computer was a little past its warranty so I resigned myself to having lost the money it cost me, quickly backed up as many files as I could before the battery completely drained, and bought a refurbished HP Pavilion for under $300. It’s not my dream computer—it’s heavier than I want because it has a DVD drive I don’t need and it’s missing a few niceties—but it’s already lasted longer without any problems than the ASUS did.

And then I went about my business. But a few weeks ago, I was having a minor problem with my Kindle Fire tablet (which I love) and it occurred to me that I may have bought a Square Trade extended warranty for it. So I did a search through my email and discovered that I, in fact, had NOT bought a warranty for my Kindle Fire. But lo and behold, I HAD bought one for my ASUS computer!

I had completely forgotten about it because I virtually never buy extended warranties, as most financial experts will tell you they’re a terrible deal. And this one was almost $225, so I’m really surprised I decided to spend that much. But I’m pretty sure it wasn’t because I expected the computer to crap out on me; it was because I could totally see myself dropping the thing (after my Amex-card damage warranty ran out) and I’d have to kick myself pretty hard at that point. 🙂

I bought the 2-year warranty, which still applied, so I went ahead and filed a claim. I have to say, it was a pretty seamless process. I submitted the details to Square Trade’s website and I had to email them a copy of the purchase receipt, which I was able to download from Amazon, and within a day or two I got a notice that my claim was tentatively approved. (They needed to see the actual unit to give final approval.) They sent me a box to pack it in and a prepaid FedEx label for Priority Shipping and they ask you for your PayPal address just in case they can’t repair it and they need to refund the cost. It took me about a week to pack it up, but I finally got it sent.

A couple of days later I got an email that the claim was definitely approved and they would repair it within 2-5 business days, unless they had trouble getting parts, and then they would ship it back. The warranty states that they will fix it within five business days or they’ll refund the cost of the plan.

A couple of days after that I got a notice that they were having trouble getting a part and they gave me a new expected date to complete the repair. And then a couple of days later, I got another notice with the same message. At this point, I was kind of hoping they wouldn’t be able to get the part, because in that case they would refund me the entire cost of the laptop. And since I hated the computer, I would have much rather had the cash than the laptop back. But there was no way I was going to be THAT lucky right…?

Hells yeah I was! Just two days later I got an email from PayPal that my account had been credited with the cost of the laptop. And then I was all like:

Many of the participating bloggers are professional writers in one form or another and Yael Grauer is a freelance journalist and investigative reporter whose work has appeared in many major print and online publications. Recent posts include: