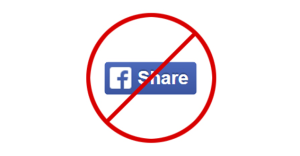 Many years ago I visited my cousin who was living in Los Angeles. It was summertime, I was planning to go to Disneyland and I made a comment about how I couldn’t imagine how uncomfortable the heat must be for the people wearing those heavy character costumes. He said, “Oh, they’re fine. The costume heads have air conditioning units in them.” I said, “Okay, that’s good to know.”

But one thing I’ve learned to be un-gullible about is not believing everything that gets shared on Facebook. Here are three types of posts you should think twice about passing on before checking them out.

This is usually followed by some set of steps you should take to prevent the egregrious behavior. The problem with these types of posts is that:

a) They’re often not doing what they’re accused of doing, and

b) The instructions you’re given don’t do what you think.

A prime example is one that I see showing up in my Facebook feed about once every three months:

“Please do me a favor and move your mouse over my name here, wait for the box to load and then move your mouse over the Friends > Settings link. Then uncheck the “Comments and Likes”. I would really rather that my comments on friends and families posts not be made public, Thank You! Then re-post this if you don’t want your every single move posted on the right side in the “Ticker Box” for everyone to see.”

If you did what you were being asked to do, all it would have done was prevent YOU from seeing your friends Comments and Likes in YOUR newsfeed and ticker; it wouldn’t have affected what anybody else sees at all.

Note: Facebook has actually taken away this ability anyway (they probably got tired of this alert showing up over and over again…) so this particular one should finally be retired, but there are plenty more like that.

Of course, one of the reasons these things ring true is because these companies have done plenty of things in the past that they shouldn’t have. But that’s an even better reason why we should check these things out before sharing them. Otherwise, people may start discounting real things they should be worried about. So if you see a post like this show up in your feed, here are two good ways to check out whether it’s true or not:

Also, if any post includes a plea to SHARE THIS WITH ALL YOUR FRIENDS, there’s a good chance it’s a hoax.

Somebody Said Something Outrageous!

These often come in the form of a photo of someone (usually the most unflattering photo someone could find) with the quote overlaid on it. They’re probably about 90% politicians and the quote is something that supports the poster’s opinion of the politician and his/her party as a whole. There may be a date or a general reference to where it was supposedly said, but no actual link to an original source.

Again, there’s no shortage of politicians saying dumb stuff, so I’m actually less likely to discount these out of hand as the techie posts above. But I have seen quite a few lately that when I checked them out turned out to either be misunderstandings of what was actually said or out-and-out fabrications.

While Snopes is always a good source to check, if it’s a fairly recent occurrence I’d start with Google. If the only results that show up are from social media sites or political blogs, that’s a real red flag. Regardless of what you think of the biases of mainstream media sources, they’re generally going to report on any controversial statements, even if it’s to criticize or defend the person saying them.

This News Story Is Unbelievable!

There’s a reason for this. 🙂

Parody news sites do a REALLY good job of making even the craziest story sound real. And, of course, these posts are perfectly fine to share if you make it clear that you’re sharing them because they’re funny.

Here are some sites that excel at blending news and humor:

Mediate has some more examples, including some parody Twitter accounts:

A Helpful Guide on How to Avoid Falling for Parody News Sites, Twitter Accounts (Mediaite, 11/20/13)

By the way, if you’ve fallen for any of the these types of hoaxes, don’t feel bad. You’re in great company…