Today’s T3 includes tips for seeing the most recent posts in your Facebook news feed, fixing a dead electrical outlet, and a deal on Amazon Echo devices. 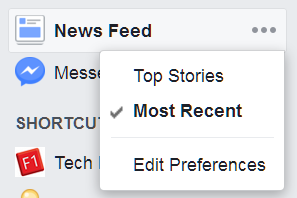 T4L reader Susan recently left a comment that the Facebook News Feed keeps returning to the Top Stories sort order, even after she changes it to Most Recent. This used to happen after a few days, but now it’s every time she logs into FB.

I’ve also noticed the same thing and, honestly, I cannot believe Facebook has gone back to this stupid strategy, which is probably the biggest complaint most people have about the service. Dear Mark Zuckerberg: Your algorithm does NOT know what I want better than I do!

One workaround for the desktop browser version is to create a bookmark for the URL that includes the sort order parameter:

Another option is to install the F.B. Purity browser add-on/extension that provides all sorts of features to let you customize the Facebook interface, including maintaining the Most Recent sort order.

Recently I had a problem where two electrical outlets outside my house weren’t working. One is attached to the back of my house and has one of those weather-protecting covers on it that you lift up to access the outlets. The other is inside my backyard shed. I assumed the two were connected so fixing one would fix the other.

I tried turning all the circuit breakers I thought could be the right one off and on again but that didn’t fix it. Then I noticed the outlet attached to the house had those buttons like the outlet in my bathroom that I sometimes have to push in when there’s no power coming to my blow dryer. So I pushed in the button, but still nothing.

I did some Googling and discovered that I was misunderstanding how these GFCI buttons, as they’re called, work. I thought there was one for each outlet. But the buttons actually do different things. One is labeled TEST and when you press that it should pop out the other one, labeled RESET. This is actually testing that this safety mechanism is actually working the way it’s supposed to, which should prevent you from being electrocuted if, for example, your blow dryer falls in the water while it’s plugged in and your hand is in the water with it. Apparently you should be doing this test on a monthly basis. Oops!

Once you’ve confirmed the TEST button works, then you can push the RESET button back in. Once I did that to my outside outlet, then both that one and the one in the shed worked again… Huzzah!

NOTE: One thing I learned in my research is that often multiple outlets are attached to the same GFCI so you may have to do some hunting to find the one your dead outlet is connected to. Apparently a popular spot is behind your water heater.

Amazon currently has a deal where you can save $100 when you buy two Amazon Echo Alexa-enabled Bluetooth speakers with promo code ECHO2PACK. The list price of an Echo is $179.99 so this brings the per-item price to just $129.99.

The deal only applies to the original Echo, not the Echo Dot, Show, or Look. You can mix and match black and white models.

There’s no expiry date listed but I suspect it’s while supplies last as there are currently a lot of rumors about a second generation of the popular product in development.

Learn more about the Echo in this T4L post. >>

The Facebook News Feed: How to (Sort of) Control What You See

How to Listen to Podcasts on the Amazon Echo

Amazon Alexa: What Is It and What Can You Do with It