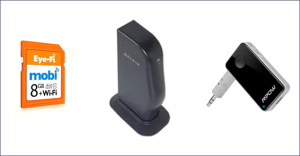 I grew up with phones where the base wasn’t just wired to the wall; the handset was wired to the base. I learned how to type on a manual typewriter and to take pictures with film. I was around for the first photocopiers, fax machines, video recorders and, of course, personal computers. And I’m not actually THAT old! 🙂

The rate of technological change has always been fast, but it seems to get faster every day. And, like most people, I enjoy shiny new things. However, what I do NOT enjoy is throwing something out that works fine just because it doesn’t have all the latest bells and whistles. And even though each new generation of technology tends to come with price reductions, it’s not like a new camera, car stereo, or TV is exactly chump change.

So I always like it when I can find some kind of gizmo that lets me have the benefits of upgraded features at low cost and no waste. Here are three of my favourites that have given new life to old tech.

Yeah, yeah, I know that a talented photographer can take gorgeous photos with just an iPhone. But I still like taking pictures with an actual camera for a number of reasons, not the least of which is that it’s not draining my phone’s battery while I’m using it!

I have a four-year-old Canon PowerShot A1200 camera that has pretty much everything I want in a point-and-shoot. Except for the ability to connect to the Internet. So when I take pics with it, I have to wait until I can connect the memory card to my computer to email images or upload them to social media.

Last year I discovered the Eyefi Mobi Wi-Fi Memory Card that works like a regular SD card except it can connect wirelessly to your mobile device so you can then upload images from there. You just need to install the free Eyefi Mobi app to your phone or tablet and leave your camera on while the files are being transferred. You can also set it up to upload directly to Dropbox or their own cloud service.

There are a couple of things to be aware of with it. First, you can’t pick and choose which images get transferred to your mobile device; they all go over at once. And once the app is set up, this happens automatically, so you need to make sure you have enough memory to accommodate them all.

Second, these won’t work with every camera. For example, I have a nine-year-old Canon digital SLR that it doesn’t work with because the camera can’t accept a card larger than 2GB and the smallest Eye-Fi card is 4GB. You can check to see if your camera is compatible here.

When I bought my car in 2012, it came with Bluetooth, which I thought meant I would be able to play the music on my phone wirelessly through the stereo. But it only has Bluetooth for the actual phone system, not the audio system. I can use an audio cable to connect it but between that and the charger cable and mounting the camera on my dashboard, the cables are a bit unwieldy.

Fortunately, I found the Mpow Streambot Mini Bluetooth Wireless Receiver that I plug into the AUX jack in the car and then stream my music from my phone to it. It works great!

I’m sure a certain swath of my readership won’t even understand what I’m talking about, but I actually have a 13-inch non-flat-screen GE TV. (I told you I hate to throw things out!) I don’t even remember how long ago I got it, but I’m thinking it was probably around 20 years ago…? And the picture quality is really not bad (GE was always a quality manufacturer). I have it in my bedroom and mainly use it to watch the news in the morning and before I go to bed.

But forget HD—it doesn’t even have jacks for RCA cables (the yellow/white/red ones). It has exactly one port for a coaxial cable so I’ve always been able to watch cable TV with it. I can also use an antenna with it so I knew that once I finally “cut the cable cord” I wouldn’t be cut off from all programming. But I was curious if I could make it work with any of the other multitude of devices I have.

I figured my best bet would be my original Roku 2 XS, which comes with an RCA cable. So after doing some research, I bought this Belkin RF Modulator that has RCA inputs to connect to the Roku and a coaxial output to connect to the TV.

Honestly, I didn’t have a lot of hopes for it so was very pleasantly surprised when it worked! You have to set the modulator to the same channel as the TV and then there’s another switch on the back with different ohm settings; I’m not really sure how that works but I tested both settings and chose the one that gave a better display. (And when I say “better display,” please note that’s all relative considering…

Also, when I first connected it, the picture was all jumbled and the audio was crackling and I had no idea what the problem was. But somehow I discovered that the end of the cable that goes into the Roku, which is a single plug with two grooves on it shouldn’t be fully inserted. I needed to pull it out halfway and that solved the problem. There’s still a bit of a hissing sound but when I’m watching a show or a movie, the sound pretty much covers it up. 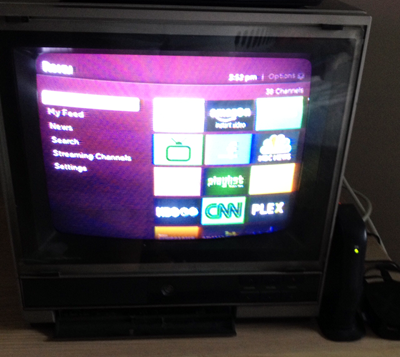 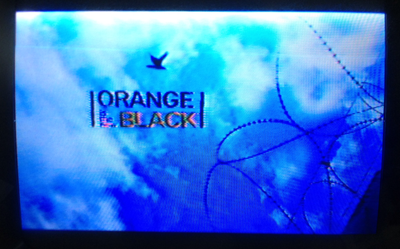 It also has a coaxial input so theoretically I should be able to keep my cable box and Roku connected at the same time, but I have not figured out how to switch between them. I’m probably just going to get a splitter so I can switch between the two devices without having to disconnect/connect the freakin’ coax cables. (Seriously… How are THOSE still a thing???)

Also, for those who might be wondering, I did try to see if I could use an HDMI to RCA adapter to use HD devices on the TV, but that was no go. You can only bring 20th century technology so far into the 21st century I guess!

Roku: What Is It and How Do You Use It?

4 Ways to Save Money When Shopping Online