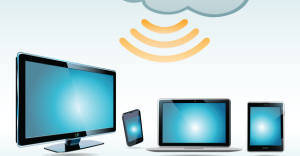 In 2011, I bought my first streaming media player—a Roku 2XS. Someone I recommended I get a Roku a few months earlier, but it took me a while to do so because I didn’t really understand what a Roku was or why I would want one. And even once I got it, I still wasn’t entirely sure what to do with it and how to do it. But once I finally figured it out, I loved it!

That experience prompted me to write a Roku explainer for others who might also be confused about it. It quickly became one of my most popular posts, so I wrote a few more about other brands of streaming players—Amazon Fire TV, Apple TV, Google Chromecast.

Over time I started adding more related posts on streaming content providers, screen mirroring from mobile devices, frequently asked questions and so on. Today you can find all these posts and more at techforluddites.com/streaming.

This post is meant to explain the basic concepts of streaming media, which can help when you’re reading any of the other ones.

What is streaming media?

Historically, the way most people watched TV was through cable, satellite, and telecom providers like Comcast, Time Warner, DirectTV, and Verizon FIOS. The signal comes into your house via a cable to a special box, which then gets connected to your TV. A basic box delivers the TV signal and other information like an on-screen program guide. A DVR box provides additional features like recording shows, pausing live TV, and more.

NOTE: For the rest of this post I’ll use the word “cable” to refer to all the different types of TV service providers.

The biggest problem with that model was that you were limited to the shows and movies that the cable companies provided—both what you could watch and when you could watch it. While most of them now have a decent selection of on-demand programming as well, you’re still restricted to what the company decides to make available.

Then along came videotapes, DVDs, and Blu-Ray discs. Now you had a lot more options of what to watch at your convenience. The problem with these, of course, was the time it took to get the tapes/discs, whether you went to a store for them or, once Netflix appeared, you had them mailed to you.

Once access to the Internet became much more widespread, video technology improved, and the costs of sending large packets of data over the Internet became affordable, it became possible to send TV shows and movies that way: what we now call streaming media. And it’s not just TV programming anymore. Many different types of content can be streamed now, including webinars, music, podcasts, games, etc.—live and on-demand.

What is a streaming media player?

At first you could only stream all this content on devices like computers, tablets, and smartphones that already had Internet connections built into them. But since those have much smaller screens than your TV, it didn’t provide the best experience for watching videos. (Depending on your device and TV, you might be able to use cables to physically connect them so the TV acts like a projector.)

Streaming media players like the Fire TV, Roku, Apple TV, and Chromecast act as a bridge between the Internet and your TV. Depending on the device, you connect it to your Internet router via Wi-Fi or Ethernet cable and to your TV via HDMI or A/V cables (yellow/red/white connectors). So movies and TV shows that you could previously only watch on your computer or mobile device can now be watched on your TV, with its bigger screen and better sound system.

NOTE: There are many different types of devices now that can stream content to your TV, including set-top boxes, Blu-ray players, home theater systems, and gaming consoles. And Smart TVs can connect directly to the Internet without any of these devices. However, at the moment the dedicated streaming players generally have a better selection of supported content providers and are more reliable and easier to use than the other options.

While the basic principle of what streaming media is and how it works IS pretty easy to understand, the practical application of it is a lot more confusing because the manufacturers of the devices that you attach to your TV don’t own the content that goes through them.

Each manufacturer has to negotiate with the various providers for rights to stream their media and the different devices support different providers. For example, while all of The Big Four support Netflix, Hulu, and HBO GO, the Roku doesn’t have iTunes content. The Apple TV does (d’uh!); however, neither it nor the Chromecast support Amazon Video. Meanwhile, Amazon Fire TV doesn’t support either iTunes or Google Play content.

Note: Which content providers work with which devices is constantly changing, so the paragraph above may become inaccurate at any time.

And those are just the main premium content providers. Each device supports hundreds of other providers, but not all the same ones. So before you pick a device, you want to make sure it offers the content you want to watch.

So if I have a streaming media player, can I get rid of my cable/satellite service?

This is one of the biggest questions people have when it comes to streaming devices. The answer depends on what it is you want to watch.

Streaming media players do not provide most local or live programming—at least, not in their entirety. For example, you’re not likely to be able to get your local morning news show unless your local station provides its own stream. And even for a national program like The Today Show, you may be able to see some of their segments through your player, but probably not the entire program.

An even bigger problem is that some TV networks only allow you to stream their content if you have a cable subscription and your package includes that network. This is because most networks still get most of their revenue from cable companies, so the latter have a lot of negotiating power, i.e. they can say “if you let people buy streaming programming directly from you, we’re not going to include your network in our packages.” This is why it took so long for HBO to release a standalone streaming service (HBO NOW).

The industry is changing rapidly but, for the time being, if you want to cancel your cable service, you should check first to make sure that your favorite programs will still be available, either through the networks’ own streaming services or through third-party providers like Netflix, Amazon Video, Hulu, Sling TV, Playstation Vue, etc.

For more details about how to access TV programs without a cable/satellite subscription, check out T4L’s Cutting the Cable Cord section.