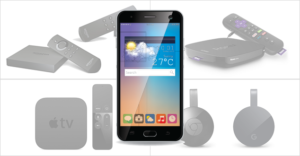 One of the questions I get asked occasionally is whether you can use a streaming media player using a mobile phone’s hotspot feature, usually by people who don’t have access to high-speed cable or satellite Internet service but do have an unlimited data plan from their cellphone service provider. I did a quick check on this once a while ago and provided this answer in the Streaming Media Frequently Asked Questions post:

If your phone has a hotspot feature, you may be able to use it as the Internet connection for your streaming media player. However, it can use up a lot of data quickly and even if you have an unlimited data plan, make sure that includes when you use the phone as a hotspot. A lot of times, it doesn’t apply to that situation.

Also note that cell service is often not as strong, fast, or reliable as Wi-Fi, so you may have issues with buffering and picture quality.

Recently, however, I received an email from T4L reader Sue who has run into problems streaming content from certain providers (Vudu and HBO) through her second-generation Chromecast, so I thought I’d do a little more testing with all of the Big Four streamers (Amazon Fire TV, Roku, Apple TV, Google Chromecast) and report back on what I found. So that’s what this post is! 🙂

Before I get into the details, though, a few important caveats:

Now, on to my findings!

Setting up a streaming player using a hotspot

I set up the hotspot from my Samsung Galaxy S5 phone using a Verizon prepaid cell plan. The streamers I tested were the second-generation Fire TV Stick, current-generation Roku Streaming Stick and Roku Ultra Streaming box, second-generation Apple TV, and second-generation Chromecast connected to a 40″ Samsung 4K TV. For content providers, I tried Netflix and HBO NOW. Netflix lets you choose the quality you want to stream and I set it to High (which uses a lot more data). HBO NOW automatically adjusts the quality based on the download speed it detects.

The Fire TV and Roku are both pretty straightforward. You set them up just like you would with a Wi-Fi connection, and when you get to the screen asking for your wireless connection, you select your mobile hotspot.

I wasn’t able to set up the Apple TV at all. When I entered the login info for my hotspot, it tried to connect and then displayed a message that there was no Internet connection. Note that the Apple TV does let you change IP addresses and other settings that I can’t explain, so it’s possible something there would let you connect to a hotspot. But considering the Apple TV is much more expensive than its competitors for a worse feature set, I really don’t recommend it to anyone but a diehard Apple user anymore.

If you do roll back to the earlier version, here’s my experience using a Chromecast through a hotspot.

I could connect the Chromecast, but the process is different since there’s no remote for the device. Also, depending on your phone, you may need to use a second device (computer, phone, or tablet) to actually do the setup. This is because although you can download the Google Home app to your phone, the app will not work unless the phone is connected to Wi-Fi. And as soon as you turn on the hotspot feature, at least on my phone, it turns off Wi-Fi. There may be phones that allow both Wi-Fi and mobile hotspot at the same time, in which case you may be able to do the setup with it alone, but I have no way of testing that.

So what I did was turn on the mobile hotspot and then connected my computer to it (you could also use a different phone or tablet with the Google Home app). With the computer, you need to go to chromecast.com/setup in the Chrome browser only to go through the setup process. Then when you get to the screen that asks you to select a wireless connection for the Chromecast, you can select the hotspot.

NOTE: When you turn off your hotspot, your Chromecast TV display will say it needs to be set up. But when you turn the hotspot back on and go to cast something to it, it will reconnect as usual.

Quality of video streaming through a mobile hotspot

Before I share my experience, please be aware that I have a pretty flexible definition of “good quality.” As long as the image isn’t too blurry, I can hear the sound okay, and there are no interruptions, I’m totally fine with it. Other people, especially those who have invested in top of the line TVs, may not find the quality acceptable.

With the Fire TV and Roku devices I found the quality acceptable to good. I would say the Roku Streaming Stick video was slightly degraded compared to the Fire TV Stick, but the latter was as good as the Roku Ultra box.

The Chromecast quality was definitely lower than the other options, but still watchable.

I tried three different methods with the Chromecast. The first was casting like normal from the Netflix app on my phone and that wasn’t too bad. The second was casting from my Chrome browser on my PC. It was about the same quality as the first method—maybe a wee bit lower quality. The third way was using the screen mirroring option through the Google Home app on my phone, i.e. I started watching the video through Netflix on my phone and then mirrored it to my TV. That was the worst quality and the video actually stopped playing at points.

If none of the methods work for your particular setup, there are a couple of other options you can try.

The first is screen mirroring, where you’re duplicating everything on your screen to your TV. Although that was the least successful method for the Chromecast, some of the other mirroring options may work better.

Learn more about various ways to mirror your computer or mobile device screen to your TV in this T4L post. >>

Another option is to download the video to your computer or mobile device and then treat it like any video you have stored locally. Options include casting or mirroring it wirelessly to a device, connecting it via a USB cable to players that have that feature, or using a media server.

Some content providers let you download videos now. Both Netflix and Amazon Prime Video let you download some of their titles as part of your membership. (With Amazon Video, you can also purchase any of their videos to download them.)

PlayOn is a media server application you can use to both stream videos directly to your TV or record streaming videos and then stream them from your computer to compatible devices. I recorded and downloaded an episode of How To Get Away with Murder using it and tried casting that to my Chromecast and the quality was about the same as streaming through my phone or browser. I also tried streaming directly from PlayOn just to see if that was any better, but it was actually worse—frequent buffering.

Plex is another popular media server application and you can also record streaming videos with it. I haven’t used it myself to be able to comment on it.

So that’s how streaming through a mobile hotspot works for me. If you’ve had different experiences please share them below.

How Many Gigs of Data Do You Need to Watch Streaming Movies and TV Shows?

Which Streaming Media Player Is Right for You?