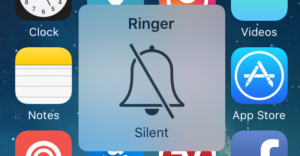 I’ve made no secret of the fact that I’m not a Mac person. And I’ve never been an iOS-device person either, but last year I did buy an iPhone 4S so I could write about how it works with streaming media players and also check out apps that are generally developed for iOS before Android. And finally I understood why people prefer iPhones to Android phones… Because they’ve never used an Android phone! 🙂

(Seriously, Apple, no Back button…? Seriously?!)

Even though I’m not a big fan of my iPhone, I do still use it for the original purpose I bought it and also for its camera because it lets me take pics without using up my actual phone’s memory and battery power.

Since I’ve had it, there have been a few times when the ringer notification would pop up incessantly saying that the phone was muted. However, in those cases, when I shut down and restarted the phone, the message would go away. But yesterday it started happening again and I could not get it to stop. So today I contacted Ms. Google and found this thread where the first respondent provides a great list of things to try:

In my case, the problem seemed to be that the Mute switch on the side of the phone wasn’t 100% set to one side or the other and when I gave it a stronger push, the message finally went away. (Huzzah!)

NOTE: This isn’t in the first answer, but further down the page it also mentions to make sure that the two volume buttons aren’t stuck or damaged in some way.

How to Watch Animated GIFs on an iPhone or iPad