In yesterday’s kickoff post for the 2013 WordCount Blogathon, I said that today I was going to post a rant. But then I thought that’s not a great post to start off my T4L reboot with, since this blog is primarily a how-to resource. So, instead, I thought I would start with a QuickTip that I learned last year about how to stop animated GIFs from, well, animating. But then when I went to try it, it didn’t work. So I did some research and found a fix, but that means that after the instructions below, I am going to definitely give my two cents about this change.

Last year, someone posted a link in a writer’s forum I frequent to a humorous review of Fifty Shades of Grey on GoodReads, with the various points accompanied by representative animated GIFs. Another person at the forum said she couldn’t get through the review because she found the animations too distracting, at which point a third person shared a tip that you could use the Escape key to stop the GIFs from playing on the page.

That was a VERY welcome piece of news, indeed. Now, I enjoy animated GIFs as much as the next guy (especially when they involve cats acting cattish) but there are definitely times when the animation becomes annoying and so I would end up just leaving the page altogether.

And Now the Tip…

So I figured I would share that tip here today but, before I did, I tried it out again to make sure I was remembering it correctly. And, sure enough, when I hit the Escape key, nothing happened. So I took to “the Google” and found out that Firefox had changed that functionality as of version 20 (I’m now on v. 21). Now, if you read this bug report that was submitted soon after the release of that version, you’ll see that there were many people complaining about this change, while the Mozilla folks gave some too-techy-for-even-me explanation as to why it had been necessary. But it turns out there is an add-on you can install that will give you back that feature, which is what I’m going to post below. But I also discovered that the situation is different for each of the browsers, so I’m going to add that info as well.

If you have version 19 or earlier of FF, you don’t need to do anything right now—the Escape key will work fine.

If you have version 20 or later, you’ll need to do the following:

While using Firefox, go to the BetterStop add-on page. 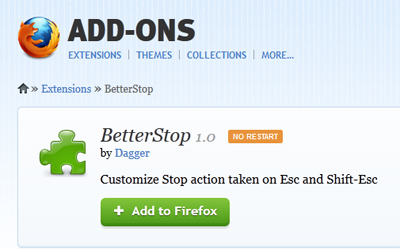 Click the Add to Firefox button.
A dialog box will pop up asking if you want to proceed. 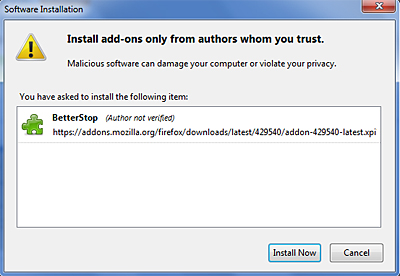 Now, for some reason, sometimes I have to hit the Escape key twice to make it work, but that’s not so bad. Also, the way this Add-on is set up by default, if you hit the Escape key before the page has finished loading, it will also stop the static images and the page itself from loading. So you can either wait until the page has finished loading to stop the animations or you can go to Tools > Add-ons > Extensions and use the BetterStop options button to change the first option from Both to Content. 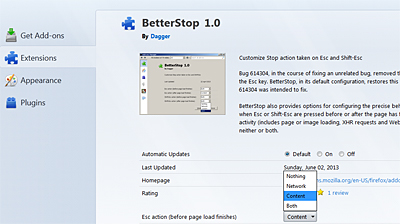 Note: If you want the animations back, you’ll need to reload the page.

It seems like Chrome never had the built-in Escape key functionality, but there is a script you can install to get it. However, after reading through the instructions, I’m not particularly comfortable installing this script myself. So I’m not recommending it, but the link is there if it’s important enough for you to want to take the risk. (I doubt that applies to many of you, but you never know…)

I don’t have Safari installed on my current computer so I can’t test this, but according to this MacWorld thread, recent versions should allow you to use the Escape key as well as long as you hold it down (i.e. don’t just tap it quickly). If you try this, I’d appreciate it if you could add a comment below so others will also benefit from the info.

UPDATE: After a friend told me that it didn’t work for her, I decided to install Safari myself. And unfortunately, the Escape key doesn’t work for me either, regardless of whether I hold it down or not. I’m on Windows, not Mac, so that may make a difference. But for the time being, I haven’t got a solution for this browser.

For once, IE is the good guy. 🙂 The Escape button works fine without needing to do anything.

And Now the Rant…

I first started using Firefox as my default browser several years ago when Internet Explorer changed its interface to a layout I didn’t like while FF looked much more like the previous version of IE. And for many years, I was really happy with Firefox.

But starting in the middle of 2011, some brainiac at Mozilla, the company that builds Firefox, decided they were going to implement a “rapid release” program where users would get software updates EVERY SIX WEEKS. No, not every six months—every six weeks. So in the last two years we’ve gone from version 6 to version 21!

I think this is completely crazy. Software updates at the best of times are disruptive to the user, but most people can live with behind-the-scenes patches for things that aren’t working or to strengthen security. The following article outlines very nicely the problems caused by Firefox’s accelerated delivery cycles:

There have been several times over the last two years when I’ve been negatively affected by a Firefox update, but I can’t think of a single time I got something better out of it. The problem I have now is that I don’t like any of the browsers very much. I’ve tried Chrome and I can’t put my finger on it, but there’s something about it that bugs me. And IE seems like a dinosaur to me now. Man, it would be nice if just once a software company would think about its users before making a major overhaul…

In Case You Missed It

Since this post is primarily about animated GIFs, I would be remiss if I didn’t share this bit of news-slash-controversy that came out a couple of weeks ago:

As a longtime “jif”-er, I feel totally vindicated… 🙂