Fire safety experts recommend you change your smoke alarm batteries twice a year when you change you clocks. Add upcoming dates to your calendar now so you don’t forget. 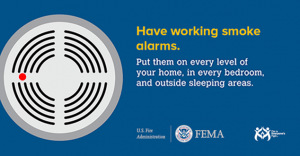 When I bought my house in 2012, it didn’t take long after moving in before I discovered something I did NOT love about it—an overzealous smoke detector.

In the past, I’ve occasionally had to deal with smoke detectors going off by accident due to smoke coming from the stove or if I burned a piece of toast. But the alarm that was installed down the hallway from my current kitchen would basically go off every single time I cooked anything on the stovetop—even boiling water! Basically if there was the slightest bit of steam rising from the pot, the alarm would go off.

I didn’t know if it was because I had a gas stove instead of an electric one, so there was an actual flame sending off heat, or if the alarm was positioned in a particularly bad spot (although I’ve had alarms closer to the stove before). All I knew was I had to find some solution before it drove me around the bend. So off to “the Google” I went…

I was surprised to learn that there are actually two different type of smoke detectors: ionization and photoelectric. Even after reading about them, I can’t say that I could properly explain the difference between them to someone else, but it was enough to know that each type responds to different factors and a photoelectric one is usually the better choice for those near your kitchen.

I immediately ordered a photoelectric detector and installed it as soon as I got it. And, sure enough, the alarm has not gone off again since… Yay! (I did confirm that the detector was working by holding a small flame directly underneath it.)

So if you’re suffering from the same situation, I highly recommend you check what type of detector you currently have. If it’s an ionization style, try switching to photoelectric.

Read the US Fire Association’s position on home smoke alarms. >>

Get educational materials from the USFA for community outreach. >>