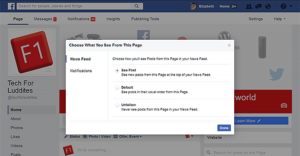 Over the years, Facebook has made a number of changes to the algorithm they use to determine which posts will show up in your default news feed. Sadly, none of those changes have ever been, “Let me decide for myself.”

A couple of years ago, they made a particularly major change from the point of view of Facebook Pages. Previously, if you Liked a Page, you would probably see their posts fairly frequently in your news feed unless you chose not to see them. Then Facebook decided that they were going to significantly limit how many people would see your Page’s posts… unless the Page owner paid for the privilege. This change got a lot of news coverage at the time, with a lot of companies really upset because they had often spent a lot of money to get their followers in the first place and they saw their posts’ organic (aka non-paid) reach drop enormously.

Since then, Facebook has made more tweaks to the algorithm and in August 2016, Marketing Land reported on a study by SocialFlow that said in the first half of the year, Facebook Pages’ organic reach had declined by 52% in the first six months of the year.

Now, while Page owners were understandably frustrated by this turn of events, a lot of regular Facebook users were probably too busy playing the world’s biggest violin to notice. 🙂 There have certainly been plenty of Pages that overshared when there was no cost involved.

However, some users actually are interested in what the companies they’re following are posting—otherwise they could just UnLike them or not Like them in the first place. If you’re one of these people who wish you could see more of your favourite Pages’ posts—like the ones shared by, say, I don’t know… Tech for Luddites—there are a few ways you can improve your chances of doing so.

The Facebook News Feed: How to (Sort of) Control What You See