As I mentioned in another post comparing the top four streaming media players (Amazon Fire TV, Roku, Apple TV, Google Chromecast), the Roku’s biggest differentiator is the number of channels it has.

The Roku has channels for the Big Three third-party content providers (Netflix, Amazon Video, Hulu) plus a few thousand more. The channels come from major broadcast and cable networks like CBS, HBO and History as well as providers of niche films and TV shows like ACORN TV (British), Honor (military), CrunchyRoll (anime) and FrightPIX (umm… do I really need to tell you?) And then there are the channels for music, personal media, games and so on.

But all those just make up one part of the story, because those are just the channels available in the public Roku store. There’s also a whole bunch of private channels (also called hidden channels) created by third-party developers using Roku’s open-source programming code. They aren’t made public for a variety of reasons; for example, the channel may still be in development or it includes adult content or it may just be REALLY niche (The Ex-Mormon Files anybody?).

But there are also plenty of channels that would interest the general public. For example, there are private channels that deliver content for CNN International, iTunes Podcasts, The Outdoor Cooking Channel, MusicMan…. And some channels, like Bloomberg TV, PBS and Plex Media Server, start out as private and then get added to the public store later.

Adding a private channel is super easy, but you don’t do it through your Roku device’s interface. Instead, you need to go to the My Account page on the Roku site (click on the “Welcome [NAME]” link in the top-right menu). Then scroll down to the Manage Account section and click Add a Channel.

Now you just enter the code for the private channel (e.g. ITPC for iTunes Podcasts) and click Add Channel.

You’ll be prompted to confirm that you do, indeed, want to add the channel (not sure why, since it seems unlikely you could do this by accident). Once you’ve done that, you’ll get a screen confirming that it has been added. 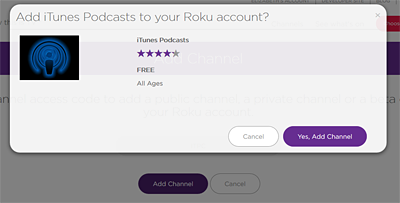 NOTE: The channel won’t be automatically added to your on-screen listings until the next software update check, which will happen at some point within the next 24 hours. But you can also manually force that check by going to Settings > System Update.

So where do you find the channels and their codes?

And there’s the rub. Even though it’s incredibly easy to add a private channel, it’s a lot more difficult to actually find the channels to add. Not because there aren’t plenty of websites that list private channels, but because the listings are very often out of date and will show channels that no longer exist or that are now available in the public Roku store.

Here are a few of the better resources to help you find private channels.

NOTE: Some of the sites don’t list codes for the channels. Instead, they offer links that have the code already embedded into it. Once you click the link you’ll be taken directly to the page for your Roku account and all you’ll have to do is the confirmation step.

The person behind The Nowhere Man has actually developed his own private Roku channel that includes access to dozens of content streams. Unfortunately, he doesn’t include the actual list on his site. This is just a sample of the wide variety of content you can see at the moment (they can change at any time): CBS and ABC network news shows, various live local station broadcasts from around the U.S., The McLaughlin Group, NASA Television, White House Press Briefings, Catholic TV, CNET, Last Week Tonight with John Oliver, The Beer Temple, Tour de France, NHL individual team podcasts… Pretty sure there’s something here for everybody!

Scroll down to the Nowhere TV section of the page to find the link to add the channel to your account.

The Streaming Advisor offers a list of his favorite private channels as well as tons of helpful content about streaming in general.

I’m not a fan of the white text on black background of this site, but it does seem to have one of the more comprehensive listings of private channels available.

Do you have any favorite private Roku channels? Share them in the comments below!

Roku: What Is It and How Does It Work?

Filed Under: How To, Roku, Streaming Media, TV