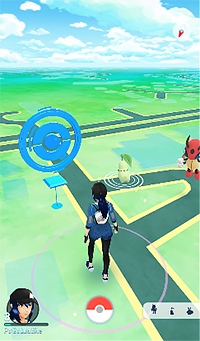 In The Basics of Pokémon GO, I showed you how to get set up with the PoGo app, create your trainer avatar, and catch your first pokémon. In this post, I’m going to show talk about PokéStops and give some more tips for catching more mons.

What is a PokéStop?

A PokéStop is a location where you go to pick up various items you need to play the game. When you first start playing PoGo, you’re given 80 pokéballs and those will last you a while. But eventually you will use those up and need more. You can either go to a PokéStop to get them for free or you can buy some from the game’s Shop. When I started playing the game I made a decision that I wasn’t going to spend any real world money on it and so far I’ve been able to live up to it. (You can earn coins from battling in gyms to use in the Shop, but I’ll talk about that more in a later lesson.)

The other reason to go to PokéStops is that that’s where a lot of pokémon hang out. You can continue to catch pokémon from your home (I got to Level 5 without venturing outside at all), but you’ll only find a few of those a day. If you really want to start earning Experience Points (XP), you’ll need to go out and look for them. (Hence the name, Pokémon GO…)

How do you find PokéStops?

PokéStops are located at public locations where people tend to gather: parks, malls, churches, monuments, etc. Go outside and launch your PoGo app and you’ll see a map of the streets and building outlines around you. You can zoom in and out of the map, as well as rotate it to get different viewing angles of the area you’re in. When you see a light blue marker with a box on top of it, you’ve found a PokéStop.

NOTE: If you live in an urban area, you probably have PokéStops all around you, with multiple on a single block. If you live in the suburbs or rural areas, there may not be that many close by. I have two within 5 minutes walking distance from me, but they’re in opposite directions. So it’s a minimum 20-minute walk to hit both of them.

You can also locate PokéStops around the world using pokemongomap.info. You don’t need to log in; you can just search on a location and zoom and pan the map to wherever you want to look. The cubes are PokéStops and the pyramids are gyms. You can turn either of these on and off in the settings.

In the map below, you can see clusters of PokéStops of various sizes at the bottom left, top left, and top right. The rather sparse area in the center? Yeah, that’s where I live… 😏 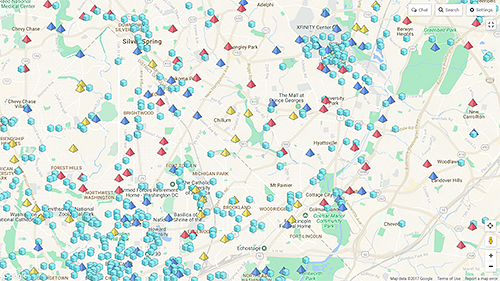 What do you do at a PokéStop?

As you’re walking, you’ll see a ring spread out around your avatar. When that gets close enough to touch a PokéStop, there’s an animation and the box at the top turns into multiple circles. Tap that and it expands to fill your screen. The name of the PokéStop and a photo from it appears in the middle of the circles.

Use your finger to swipe left or right against the center of the circles and it will start spinning around. As the spinning gets close to stopping, you’ll see a bunch of items floating out of the disc and flying off the screen. When they disappear, a list of the items will appear at the right-hand side of the screen then disappear as well.

NOTE: When you’re just starting out, you’ll primarily get pokéballs from the stop. As you level up, you’ll get additional items that will help you play the game.

You get 50 XP for interacting with a PokéStop. If it’s your first interaction of the day, you’ll get an additional 500 XP. And if you visit a stop 7 days in a row (doesn’t have to be the same stop), you get a 2000 XP bonus, and streak counter starts again.

NOTE: There’s also a 2000 XP bonus for a 7-day streak of catching pokémon. Some people, including me, like to sync the two activities so we get both bonuses on the same day. If you’ve already caught a pokémon and want to do this, you can either way until after you collect your first 7-day catching bonus and then go to a PokéStop the next day so both activities will be back at Day 1. Or you can skip 1 day of catching and start visiting stops the next day, again starting both streaks over.

When you see a pokémon and tap on it to bring it up, you’ll see a pokéball at the bottom of your screen with a number beside it that tells you how many balls you currently have. Your bag holds a maximum of 250 items so if you get to a PokéStop and it won’t spin, it may be because you have no more space for new items. This won’t likely happen for a while, though.

Once you’ve spun a PokéStop, it turns kind of a pinky-purple color. You have to wait 5 minutes before you can spin it again; you’ll know it’s ready when it’s returned to its light blue color. There are no restrictions as to the number of times you can collect items from the same stop.

Tips for finding and catching pokémon

The Basics of Pokémon GO

How to Connect a Nintendo Wii to a Computer Monitor

Filed Under: Apps, How To, Phones, Video Games Tagged With: pokemon go