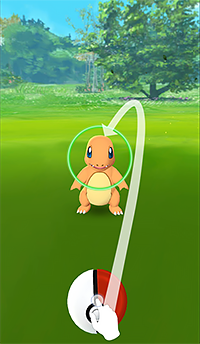 I’m not a video game fan at all. I think the last game I really got into was Space Invaders, back when I was in University. 🙂 So when Pokémon GO was released last summer and became an immediate sensation, I installed the app to see what all the fuss was about. I set up my avatar and saw my first pokémon and… had no idea what to do next. Let’s just say the game’s documentation was lacking (aka virtually non-existent). So I closed the app and never looked at it again, not feeling any sense of loss whatsoever.

But a couple of months ago I was back in Canada and hanging out with my friend G who mentioned that she really enjoyed playing PoGo. I told her my sad story about how I couldn’t figure it out at all. 🙂 G took me out for a 15-minute walk and showed me the basics of the game on her phone, which did make it look more interesting. So when I got back to the States, I decided to give it another shot.

And now I’m addicted to it. 🙂 Not really, but I do find it a lot of fun and play a little every day. I even plan outings around going pokémon hunting, which I never could have imagined before. And even more amazing, in the eight weeks since I started, I’ve walked nearly 125km… Woo-hoo!

So I figured there may be more people out there like me who had looked at it but because of the lack of instructions also gave up and decided I would write a few posts explaining the basic concepts to encourage others to get out and join in the fun.

What is Pokémon GO?

Pokémon GO (PoGo) is a game you play using an app on your phone or tablet that was developed by Niantic (partially owned by Nintendo). There’s no computer version available. It’s based on the Pokémon trading cards that were immensely popular with all my friends’ kids back in the 90s and early 2000s and that eventually spawned an online version as well as a bunch of related video games. I have no experience with any of these so when I talk about PoGo, I won’t make any attempts to compare it to the other game formats.

Get the app for Android. >>

How does Pokémon GO work?

PoGo is an individual game; you don’t compete directly against other players. (Later you’ll learn about battling pokémon in a gym, but the ones you’re fighting are acting based on a computer algorithm, not another person’s actions.)

The basic concept is that there are all sorts of “pocket monsters” living among us and Professor Willow (fictional) is doing research on them. He needs people like us, who are referred to as Trainers, to catch the pokémon to help him.

When you catch a pokémon, you get Experience Points, or XP. As you collect more XP, you increase your trainer level. I’m currently at level 23 and the highest level is 40. That may sound like I’m not too far away, but each level requires more and more XP to level up. So going from Level 1, where you start, to Level 2 requires 1000 points while going from Level 39 to 40 requires 5 million XP! At the time of writing this, I’m 15K XP away from reaching the 125K needed to move up to Level 24.

When the game launched, there were 151 different species of pokémon in the game. Since then another 100 have been released and there will likely be new generations to come to keep the game interesting for everyone. As you catch new ones, they get added to your “pokédex,” so in addition to trying to level up your trainer, you can work towards the game’s challenge to “catch ’em all!”

You earn points when you catch pokémon with Poké Balls. You get 100 points for a standard catch and bonus points for different types of throws, which I’ll go into more detail about in a later post. Sometimes the pokémon will break free, in which case you can try again or not. And sometimes they’ll run away, so there’s no choice to make.

Each individual pokémon also has points assigned to it. Combat Points (CP) tell you how strong they are. The higher the number, the harder they will be to catch and the stronger fighters they will be in gyms. Hit Points (HP) represent how much damage they can take from other pokémon in battles. The higher the number, the longer they’ll last before fainting (same concept as being knocked out). There are ways to increase both those values after you’ve caught the pokémon, which again I’ll talk more about later.

When you start the game, you’re given a certain number of Poké Balls to start catching pokémons. You’ll run out of those fairly quickly so you’ll need to go to PokéStops to collect more (they’re free). PokéStops are usually around places where a lot of people normally gather: parks, stores, libraries, churches, etc. If you live in an urban area, you could have multiple stops on each block. If you live in the suburbs or rural communities, you won’t have as many near you.

Well, that’s more than enough to get started. If you’re interested in checking out the game, you can download it from the App Store or the Google Play Store. When you launch the app, you can sign in using any Google account or you can create your own Pokémon GO account. You’ll then be able to create your avatar, with options for hair, eye, and face color and multiple clothing options. You’ll also pick your Trainer’s name; note that you only get one name change ever so choose a name you’ll be happy with!

Finally, you’ll have a chance to catch your first pokémon. Here are some things you need to know to do that:

Congratulations… You’re now an official Pokémon GO trainer! In future posts, youll learn how to find more Pokémon and collect additional items to help you catch them as well as learn about other features of the game. In the meantime, you can still catch pokémon from your home or office. I was able to get to Level 5 without leaving my house!

Tip: You get a big bonus for catching at least one pokémon every day for seven days in a row.

Before I finish this post, I’d just like to add a personal note to my friend, G: THANK YOU! 🙂

How to Connect a Nintendo Wii to a Computer Monitor

Filed Under: Apps, How To, Phones, Video Games Tagged With: pokemon go