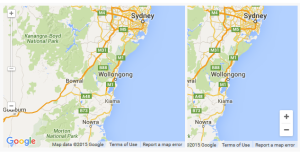 If you’ve been using any of the online maps that still include features of the great Classic Google Maps, you may have noticed some changes to them recently that made you think they had been “ugh-graded” to the New Maps.

I reached out to Barry Hunter, the developer behind Classy GMap, one of the best mapping solutions that still provides a lot of the features of Classic Google Maps (including the beloved street view/map splitscreen!). He told me that the change is mainly cosmetic so that all maps have similar controls now. For example, the zoom slider from the left-hand side has been removed and new zoom controls that only provide a one-level-at-a-time function are now at the bottom right. But the majority of the Classic Maps functionality is still there.

The following articles written for Google developers provide more information about the change:

Oh, and all the maps now have the new Google logo… Yippee! [/sarcasm]

The posts also give developers instructions on how to maintain the old controls style until August 2016. Barry told me his point of view is that as long as it’s going away eventually, we might as well get used to it now, which I get. Having said that, he kindly put together a test view at the link below. (I don’t know if this will automatically be updated with other enhancements, and I don’t want to keep bugging him because he’s been so generous with his help already.)

Another change that will happen in January 2016 is that Google will be deactivating its Google Maps Engine layers, which sounds ominous. But Barry tells me the only effect to his maps will be losing the layer that shows U.S. counties.

Google Is Getting Rid of Classic Maps for Good (Ugh.)