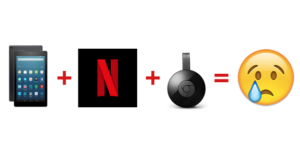 Back in June 2014, when I wrote the original post explaining how a Google Chromecast works, I talked about how after I set up the device using my laptop, I was able to then stream Orange Is the New Black to it from the Netflix app on my Amazon Fire tablet. However, at some point after that, either Amazon or Netflix or both removed this option. I used to think it was Amazon because it was right around then they released their own streaming player, the Amazon Fire TV, to compete against the Chromecast. But newer Fire tablets with their latest operating system can cast other apps to Chromecast, but still can’t cast Netflix. So now I’m not sure who to blame… 🙂

NOTE: If you’re interested in casting other content from your Fire tablet to your Chromecast, you’ll first need to add the Google Play store to your tablet.

Now when you’re using the Netflix app on the Fire tablet, you’ll still see a casting icon. But when you click it, the menu that pops up doesn’t list the Chromecast as a device you can cast to. If you have a Fire TV or Roku streaming player, they will show up on the list, although they have built-in support for Netflix so you wouldn’t need to use your tablet unless you want to use it in place of the player’s remote. 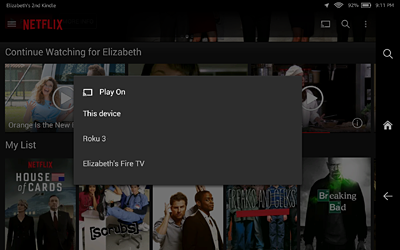 I’ve also tried going directly to the Netflix website on my tablet’s Chrome browser, thinking I might be able to cast from there. But when you try to play a video from the Netflix mobile site, it tells you you have to use the app! (Plus I don’t know if there’s a way to make the mobile browser stream to Chromecast anyway…)

Also be aware that even if you install the Netflix app from the Amazon app store, you may get a warning that it requires Google Play services to run. But you CAN still watch videos through it on the device and, as mentioned earlier, you CAN cast them to the Fire TV player and potentially other ones as well.

Which brings us to…

What are your options for watching Netflix on a Chromecast?

You’ll need an Android or iOS phone or tablet with the Netflix app on it or you can cast from the Netflix website using the Chrome browser on your PC. Alternatively, you can get one of the other players that let you cast Netflix from your Fire tablet or a Smart TV that has Netflix built into it.

Which Streaming Media Player Is Right for You?

Amazon Fire TV: What Is It and How Does It Work?

Roku: What Is It and How Does It Work?