UPDATE 01/17: This post was originally written in 2013. More than three years later I’m currently at Inbox Thirty-Eight, which is still pretty darn good. It’s a constant battle, but I seem to be doing something right… 🙂 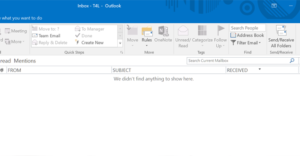 I have to preface this post by saying I am the WORST at keeping my email inbox under control. Part of the problem is that my natural real-world packrat tendencies have translated into my digital life. It kills me to delete a non-spam email, which is really the fastest way to clean out your inbox. In my defence, I have had numerous occasions where I was able to track down a message I had received or sent years earlier.

But there are limits even for me. A couple of months ago I had more than 5,500 messages in my inbox, with hundreds of them unread. I spent a couple of hours over the next couple of days bringing that down to under 2,000 and I was good with that. But I noticed earlier this week that I had crept up to about 2,800 again and so I started another filing/purging effort. I was actually able to get it under 1,000 in the first pass and rather than being happy with that, it triggered something in me that said “more, more!” So for the last few days, I’ve been chipping away at it again and at 8:15 this morning I finally arrived at a place I hadn’t seen in years: Inbox Zero!

Now whether or not Inbox Zero is actually necessary or desirable is a matter of personal opinion. But I must say it sure feels good for a while! (Not good enough, however, to want to turn this activity into a party a la Facebook CEO Randi Zuckerberg…)

To get to this point without having to actually get rid of the messages, I have a lot of folders that I move them to. And while that makes my Inbox look a lot less daunting, it does raise the question of how to find messages after they’re filed. Here are my top three tips for doing that.

Set Up Folders by People

I use Microsoft Outlook as my email client and currently have about 90 folders in my main account. Of those, about half are someone’s name. My reasoning is that whenever I’m looking for something I know I saw in an email, I almost always remember who it was from but not necessarily the subject line. So with my method, I start by searching that person’s folder. When I find the email, if I still need other info related to the discussion, I now have the full subject line and other words I can use to search through my entire mailbox.

As I said, these account for about half my folders. I also have them for some major projects and other topics that regularly involve multiple senders, e.g. my House folder includes emails from my insurance company, realtor, handyman service etc. And I sometimes group people that I don’t exchange individual emails with often into a single folder, e.g. Ottawa friends.

By the way, I also used this approach when I worked in an office. I showed it to one of my colleagues one time and he said he was going to immediately start doing the same thing because he thought it would make a huge difference in keeping his mailbox under control. So I hope some of you find the tip as helpful!

I have a single folder called Receipts that includes actual transaction receipts for when I buy things online. But I also use it for filing all sorts of automated messages I get regularly: new account information, support tickets received, password change confirmation, etc. If I had a separate folder for each of those senders, I’d have so many folders it would take an hour to scroll through them all. By putting them altogether and then sorting messages by name or subject line, I can usually find what I’m looking for pretty quickly. 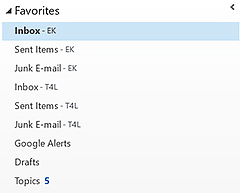 By default, Outlook includes the Inbox and Sent Items folders from your default mail account in the favorites list. I add a lot more to the list, including the Inbox, Sent Items, and Junk folders from other accounts and folders for people or projects I’m frequently emailing with/about at the moment (then I remove them from Favorites once the frequency subsides). Having the Junk folders there is especially helpful for catching emails that accidentally got marked as spam because I’m much more likely to check them when I see the bold number that indicates new messages have arrived.

Do you have any tips that really help you manage the onslaught? If so, please share them in the comments below.

Filed Under: Email, How To, MS-Outlook