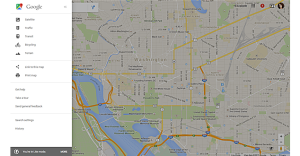 In 2014, Google changed their maps product and made it really crappy. So I wrote a post titled “Revert to Classic Google Maps,” which quickly became one of my most popular posts.

You might think that when all these people switched back to the old version, Google would realize they liked it and keep it around. Unfortunately, you’d be wrong. If you had made the switch, when you go to Google Maps now, you’ll instead find something called the Lite version. You can tell if it’s rolled out to you by the lightning icon at the bottom right. When you click on it, it tells you you’re in Lite mode and gives you the option to switch back to the Full version.

According to Google, the Lite version is designed to work faster. While I appreciate speed, I’m not happy with some of the functions they’ve removed, including setting a Home location and measuring the distance between places.

As I mentioned above, you can switch back to the full version of Maps by clicking the lightning icon. Unfortunately, that takes you back to the “new and improved” version of Maps, which may be new but is anything but improved. It’s slow, cluttered, unintuitive and is still missing a lot of important features including several views, the full map/street view split-screen, and the ability to add more than 10 destinations in a plotted route.

Note: I’ve received notes from some people about missing features but they’re only missing in the Lite version. (eg. Search Nearby Places) So make sure you’ve switched over to the full version before deciding the feature is completely missing.

If there’s one sure sign that Google knows that people aren’t happy with the new Maps, it’s the fact that they felt the need to put up a page explaining why you’re better off with the version you don’t want. They say you can send them feedback, but I think this entire debacle demonstrates clearly that they’re not really concerned about what their users want… Sigh.

While none of these alternative sites are perfect replacements for Classic Maps, they’re what we’ve got for now. I haven’t checked most of these out personally, but I’m linking to them anyway in case you find them helpful for your purposes. If you know of other sites you’d like to add to the list, please post a comment below.

Note: Google has changed their API so that all maps now have the new-style controls. However, this doesn’t affect most of the underlying features.

Classy GMap
An excellent alternative to Classic Maps with some of its most popular features, this mapping solution has undergone some changes since first developed. Check out this post for the most recent update (01/18/16).

Google Maps Streetview Player of Brian Folts
A reader emailed me this link with some detailed instructions about how to use it. There’s not enough room for me to write them up here, so I’ve copied them into a comment on the original Google Maps post.

Instant Street View
Thanks to reader Sappy for sharing this find that has a lot of Classic Maps’ features (searchable, zoom, 2D satellite view). However, it doesn’t have a full split-screen Street View or directions.

Meteomodel
Thanks to reader Szymon for sending along this link for a Polish site. The map has Street View (not split-screen) but doesn’t have search or Directions.

OpenStreetMap
Open-source mapping software. A reader adds, “OSM is just the database: It’s up to someone to read the data and build actual maps, and possibly provide a router such as OSRM for directions.”

Wikimapia
Thanks to reader Metal for sharing this site, which describes itself as “a multilingual open-content collaborative map, where anyone can create place tags and share their knowledge.” Has both map and satellite views, but does not include a street view or directions feature.

Ride with GPS
“Ride with GPS makes it easy to drag and draw your own custom routes with lightning fast elevation profiles to help you anticipate (or avoid) those big climbs.”

Bike Route Toaster
“BikeRouteToaster.com is a course creation application primarily aimed at Garmin Edge/Forerunner owners although other users without a GPS may also find it useful for planning rides.”

Ride with GPS
From their About page: “Ride with GPS was founded by two guys that love writing cool software and riding their bikes: Zack Ham and Cullen King.”

Filed Under: Google, Google Maps, How To, Maps, My Two Cents, User Interface