What is the Chromecast? 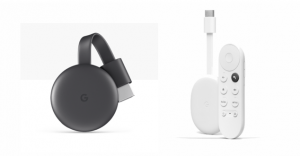 The Google Chromecast is a streaming media player, which means it takes content from the Internet and displays it on your TV.

The Google TV version supports 4K Ultra HD and HDR video, includes a separate remote and on-screen interface for browsing apps and content, and can control smart home devices. It comes in white, blue, or pink, none of which you will see after you plug it into the back of your TV.

The basic version of the Chromecast supports standard 1080p HD and you control it via the Google Home app on your Android phone or tablet or through the Chrome browser. It comes in white or black.

The original (and current basic) Chromecast works differently than other popular streaming media players like the Amazon Fire TV, the Roku, and the Apple TV. Those devices all have on-screen interfaces that display the channels/apps that can be played through them and come with remotes to navigate through the interface. With the basic Chromecast, you find the content you want to watch/listen to/play on your Android or iOS mobile device or in your Chrome browser and then “cast” it to your TV through the player. (You’re not actually sending the full signal to the Chromecast from your device; you’re just sending the URL and it picks it up directly from the Internet.)

Well, that might have worked in the early days of streaming when it was mainly young people who were already watching content on their phones so were fine just tapping a button to watch it on a bigger screen. My guess is that with the boom in streaming over the last few years, Google realized that there was a huge market that really wanted that separate remote and TV-based interface that the other companies all provide, so in 2020 they introduced the Google with Google TV. This upgraded model also comes with a remote and on-screen interface as well as some higher-end tech specs. You can also use the Google TV model to control smart home devices, another booming category.

What can you do with a Chromecast?

Watch Streaming Videos
Not surprisingly, the Chromecast can stream videos you buy from the Google Play store as well as their own YouTube app. But there are many other top content providers that work with it as well, including Netflix, Amazon Video, Hulu, HBO MAX, Peacock, Sling TV, ESPN, Disney, PBS, History, NBA, and many more. It does not have apps for any of Apple’s services: Apple TV+, Apple Music, iTunes.

IMPORTANT: Buying a Chromecast does not give you access to the content you can watch on it, just like buying a TV does not give you access to cable TV shows. You need to have accounts with each streaming service that provides the content (some free, some paid) and/or subscribe to a cable/satellite package that gives you permission to access shows from specific networks through the Chromecast.

Listen to Streaming Audio
The Chromecast lets you play music from several popular services as well, including their own Google Music, Pandora, Spotify, and iHeart Radio.

Mirror Your PC and Android Device Screens on Your TV
Using the Chrome browser on your Windows desktop or the Google Home app on your mobile device, you can mirror its entire screen to your TV. So, for example, it would let you watch a video that’s only available online or read your email or display a presentation on your screen.

NOTE:The difference between casting and mirroring is that with casting you can do other things on your computer without interrupting whatever content is being sent to your TV. So if I’m watching Jessica Jones in a Chrome browser tab and I cast it to the Chromecast, I can switch to my email and the video will continue playing. With mirroring, you’re basically just replicating whatever is displayed on your computer screen on your TV. So if you move from one program to another, the same thing will happen on your TV. In the Jessica Jones example, when I switch to my email client, that’s what will now show up on my TV.

Learn more about screen mirroring in this T4L post. >>

To be honest I rarely used my original Chromecast, mainly because I’m just not someone who has a mobile device in my hand at all times; I’m one of those people who much prefer using a remote when watching something on TV. I haven’t yet had a chance to try out the Chromecast with Google TV so can’t comment on how well it works.

For people who do use their phones or tablets for everything and are constantly using one app or another, the basic Chromecast is a very convenient option at a very good price. A few years back I recorded an episode of The Luddite Lounge podcast with Ryan Downey from The Streaming Advisor. He gave an example that a Chromecast makes a great dorm room player, i.e. you’re sitting there studying and are in the mood to listen to some music so you open up your Pandora app and send it to your Chromecast. In other words, it would make a GREAT gift for your college-aged kids or grandkids. 🙂

Also, the Chrome browser extension can be very convenient for someone like me who’s constantly got my laptop open because you can easily watch videos or listen to music through your TV speakers without needing to deal with another piece of hardware.

Getting started with the Google Chromecast

Again, I haven’t got a Chromecast with Google TV yet, so here’s a link to instructions for setting it up on the Google website.

Set up your Chromecast with Google TV and Voice Remote

The process for setting up and using the basic Chromecast is different than with the other players because it doesn’t have its own on-screen interface.