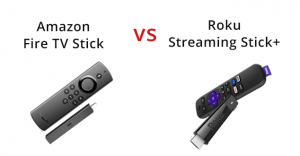 The streaming media scene has changed dramatically since I first started writing about the technology back in 2013. At that time, you were just as likely to use a DVD player or gaming console to watch Netflix (the only real streaming service at the time) as you were to use a dedicated player. Today, there are many more options including more than a dozen popular player models as well as cable boxes and Smart TVs that have streaming channels built into them.

With all these choices, it can be difficult to decide which one will work best for you, which is why I put together a comparison chart for an at-a-glance view of the main differences between the Big Four of streaming players: Amazon Fire TV, Roku, Apple TV, Google Chromecast.

This post, however, simply compares the Amazon Fire TV Stick and Roku Streaming Stick_, both of which are excellent options for people who are buying a player for the first time; who want a second (or third) device for their other TVs, their kids, or for traveling with; or who are looking for an affordable gift that provides a lot of streaming bang for the buck.

Before looking at the differences between these two devices, here are a few things that are the same for both of them.

Here are some of the main differentiators between the two devices.

These are the list prices of the various models.

NOTE: As of November 2020, the Fire TV does not have a Peacock app and the Roku does not have HBO MAX. The companies are supposedly in negotiations but there’s no way of knowing when they might come to a deal.

Roku also has channels for FandangoNOW and VUDU.

Amazon has its gaming app, Twitch, and Silk, the browser it uses on Fire tablets.

A couple of years ago, Roku had many more channels than any of the other players, but as I tried to find ones on Roku that aren’t on the Fire TV, there weren’t many except for very niche channels like their lengthy list of international content providers. They also used to have a whole slew of private channels like NASA TV that weren’t available to stream elsewhere, but nowadays you can find a lot of these on many more platforms including other streaming players, YouTube, and social media.

Both players support dual band Wi-Fi. Additionally, you can get an Ethernet adapter for your Fire TV Stick for a wired connection to your router.

All of the models except the Fire TV Stick Lite have buttons for controlling your TV’s power and volume.

Another previous major differentiator that has gone by the wayside is that you can use Alexa voice search for both Fire TV and Roku streamers. However, there are still some differences between them.

Not surprisingly, the Fire TV is fully integrated with Alexa, Amazon’s voice assistant, including via the microphone button on the remote or using an Alexa device (e.g. Echo) for hands-free control.

Learn more about controlling your Fire TV Stick with an Alexa device on the Amazon website. >>

With Roku, you can use Alexa to search for content as well but not from your remote. Instead you need either a separate Alexa device or the Alexa mobile app. (You can similarly use the Google and Apple voice assistants with the Roku.)

Learn how the Roku works with Alexa on the Roku website. >>

While earlier versions of the Fire TV Stick supported mirroring content from your mobile device, the current version no longer has that capability. The Roku sticks do support mirroring, both from compatible mobile devices and Windows computers.

Learn more about screen mirroring in this T4L post. >>

As you can see, both of these streaming media players are solid options. Which one will work best for you depends on which features are most important to you as compared to the price. There was a time when I would have said go for Roku if you wanted more channel options, but there just isn’t that much difference anymore unless you’re really looking for some of the very niche channels.

Learn more about all the Amazon Fire TV and Roku models in these T4L posts. >>