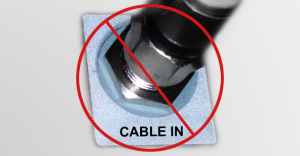 All this past week we’ve been looking at the various ways you can continue to access TV programming if you cancel your cable or satellite service. In this post, I’m going to provide a summary of what steps you should take to decide if cutting the cord will work for you. At the end of the post, I’ll provide an example of the costs of doing so.

Are you ready to cut the cord?

To answer this question, make a list of all your “must-see” programs.

Find Shows You Want to Watch As Soon as They Air

If the shows are available over the air (primarily CBS, NBC, ABC, Fox, CW, PBS), you can watch them using an antenna if you can get a good signal.

If the shows are on cable networks, you will only be able to watch them if the network makes a live stream of the show available. Check their website to find out. Most won’t be and even some shows that are listed as “live” may be slightly delayed.

Find Shows You Can Wait To Watch

First, see if the shows are available to stream from the network’s website. If they are, try to watch an episode. If you can watch it without being prompted to log into your cable or satellite provider, you can probably watch it for free on TV using a streaming media player (if the player has a channel for that network), PlayOn software, or by mirroring your computer/tablet/phone’s screen.

If you have to log in, the only way you’ll be able to watch it without a subscription is if the show is carried by third-party content providers. Hulu Plus and Amazon Instant Video will usually have them available the next day; Netflix will likely be a season behind. Check all of their websites to see what they carry. All of them have free trial periods if you can’t see the list of shows publicly.

Note: Depending on the show, some episodes may be available on the free Hulu website, anywhere from several days after the original airing to from previous seasons. However, you’ll only be able to watch them on TV via PlayOn or mirroring; no streaming media devices have the free channel built in. Free Hulu has other limitations as well, including the number of episodes available of each show and how long they stay on the site.

In my case, one of my favorite shows is Major Crimes. TNT does not allow you to access the streaming version without a cable subscription. However, Amazon Instant Video has the episodes for $1.99/$2.99 (standard/HD) the day after the show airs. That would work fine for me.

The best experience will be with a streaming media player that has a channel/app for the show providers, whether they’re the networks themselves or a third-party service. So once you know which providers offer your shows, go to the websites for the various players to see if they support those. The main ones are Roku, Apple TV, Amazon Fire TV, and Google Chromecast, but some gaming consoles, Blu-ray players, and home theater systems offer them as well. And if you have a smart TV, they may have built-in channels for them.

For more details about the four main players listed above, check out the T4L Streaming Media Players series.

If you can’t find a combination of content provider/player that works for you, you can try the PlayOn software. You will need a Windows computer (or Parallels on a Mac) to run the software on as well as a streaming device, like the Roku or Chromecast, to cast the video to from your computer or mobile device. PlayOn has a 30-day moneyback guarantee, which is good since the only way really to see if it will work for you is to install it and try it out.

Finally, if none of the above works, check out whether or not you have a device you can mirror your screen from (Windows 8.1. PC, Kindle Fire, Android and iOS devices). If so, you can get a streaming player that will accept the mirrored signal. If you think you need this, definitely check out the post about mirroring because this option has the most caveats about whether or not it will work.

Now, once you’ve gone through this entire exercise, it’s quite possible that you will find some situations that aren’t perfect. For example, my normal morning routine is to turn on Morning Joe every morning as sort of “background music” while I check emails and do some blog and social media stuff before I get to my main work for the day. MSNBC has a live video stream but to access it you need a cable subscription. So if I cut the cord, I’ll have to watch something else or stream other content during this time.

Figure Out Whether the Cost Savings Are Worth It

Depending on what all you’ve determined will work for you from the above, you’ll probably have to spend some money up front. For example, here’s what I have in place. I’m putting down list prices for everything, even though I got most of the items with some kind of discount (or, in the case of the hard drive, already had one) and I’m not including cables and other accessories.

As for the ongoing cost savings, I currently pay about $160 per month for my Triple Play subscription, HBO, and two set-top boxes and it’s going up to $195 next month as some of the discounts expire. I can get the same level of Internet service by itself for $94.99/month (I have a higher than average speed). I’m not sure what the Voice part of my package will cost (or if I even want to keep it) and I don’t know if I’m going to want to subscribe to standalone HBO streaming when it launches in April, but let’s assume those two things together will cost about $50/month. I’m not going to factor in the $8.99/month Netflix subscription or occasional Amazon video purchases because I buy those now even with a cable subscription. So that brings the new bill to $145, $50 less than my current one, so I’ll cover the upfront costs in 9 months.

And now if you’ve been thinking of cutting your own cable cord, hopefully now you have a better sense of whether you can make it work for you or not.

Filed Under: Cutting the Cable Cord, How To, Streaming Media, TV Tagged With: antenna