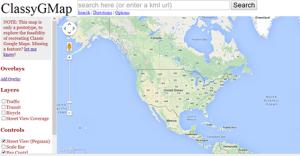 Last year when Google killed off their Classic Maps program and replaced it with a much less user-friendly option missing a bunch of key features, many of us were thrilled to discover Classy GMaps. This excellent program created by mapping enthusiast Barry Hunter used the Classic Maps API to provide many of the most popular features, like split-screen Street View, that had been removed from Google’s new version.

I reached out to Barry to find out what the situation is, i.e. is this a temporary solution that will go away again in the near future. He got back to me to let me know that to adhere to the terms of service, he did have to remove some features, like Directions and Business Search, so that his product isn’t considered a “replacement” for Google Maps. Fortunately, it does still have the splitscreen Street View option as well as other features that are still missing from the new Google Maps. (I also noticed the name Classy GMaps is now missing; I’m guessing that was part of the issue as well.)

Download and Run the Maps from Your Own Computer

IMPORTANT: The following information is not being shared or endorsed by Barry and if you use it, you could be violating Google’s terms of service. Also, if enough people do it, Google may find a way to turn off the functionality altogether, so be forewarned.

Some readers have also alerted me to the fact that there’s still an old version of the Classy GMap code on github and if you save it to your computer, you can actually run the maps yourself—a good option in case something happens to Barry’s site again. To use this option, right-click on this link and save the file to your hard drive (don’t just click on it or you’ll see the raw code). Then find it on your computer and double-click it to launch the map in your browser. This version still has the Directions and other features Barry had to remove from his own site.

Note: Thanks to reader George for alerting me that you may need to change the extension from .html to .htm in some circumstances.

A Note about Google Maps

In case you haven’t been back to Google Maps since the change, they have added back two features that they had removed from the Classic Maps. The first is that you can now collapse the big information block on the left that was covering up so much of the actual map (click the arrow at the top right to collapse it). The second is that you can get the zoom slider back by holding your mouse over the zoom buttons for a second and a popup will appear that lets you show the slider again. UPDATE, 09/13/16: They’ve also added back the split-screen Street View. Woo-hoo!

I’d like to think that the noise we made last year played some part in bringing back these features and I hope there will be more fixes to come.

Google Is Getting Rid of Classic Maps for Good (Ugh.)

Filed Under: Google Maps, How To, Maps, Updates, User Interface