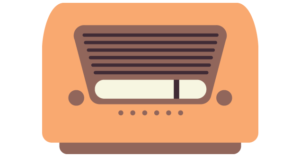 Today’s Blogathon 2016 post is going to be coming in right under the wire because I spent 10 hours today driving back to Maryland from Canada. Whew!

And while I’m pretty tired, during the drive I remembered something that gave me the idea for the post. When I bought my car (Hyundai Elantra Hatchback) four years ago, it came with a stereo system that included three months of free Sirius XM service. (Or maybe it was six months; I don’t remember anymore.)

I had never had Sirius XM before and the thing about me is that there’s usually only ONE thing I want to listen to on the radio: pop music. (Sorry, readers who are music snobs aficionados!) So I quickly discovered Channel 016’s The Blend, which plays mostly recent pop hits with a smattering of older songs in there as well. And I was happy with it except for one thing: the radio’s display would only show the name of the artist and song for a second or two when it first came on, then it switched to the name of the channel and its category, which I already knew. I thought maybe there was a setting I could change, but when I pressed the Info button, it didn’t do anything except turn off the channel number.

Fast forward a year or so and I was doing the Canada/Maryland drive only this time I had a friend with me and she and I switched off driving every couple of hours. So while I was sitting in the passenger seat, I decided to go through all the different options available with the radio, which I hadn’t done before. And lo and behold, there was a setting to let me change the default display to Artist and Title. Huzzah!

And where was it, you may ask…? Under the Clock Setup menu. Because sure.

I have no idea what company manufactures my sound system, but if you are having the same issue with your Sirius XM display, I recommend you check out all the settings available (not while driving, of course!) Which shouldn’t be surprising advice considering this post I wrote a while ago on LinkedIn:

Still no new reader tips 🙁 so here’s a little bonus tip. That thing where I clicked the Info button and didn’t get the info I wanted? Turns out it is there as long as you press the button twice.