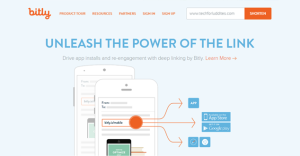 This post replaces one I wrote back in 2009 called “TinyURL: What Is It and How Do You Make One?” I had pretty much forgotten about the post but recently discovered through my web stats that a lot of people had started reading it again. So I checked it out again myself and thought, “Yikes… THAT needs to be updated!”

Bitly and TinyURL are both services referred to as “link shorteners,” which means they take long URLs and shrink them into much smaller ones. Then, when you enter them into your web browser, they get converted back to their full length. For example, both bit.ly/1c92v5e and tinyurl.com/ngnr2v will take you to the Tech for Luddites home page.

I don’t know when the first link shortener was created but it really came into its own when Twitter began to take off, thanks to its 140-character limit.

NOTE: I also don’t know if TinyURL was the first link shortener ever, but it was the first one I ever saw used regularly. And while I normally like to reward a company who comes up with such a brilliant idea by sticking with them even when the inevitable competitors come along (the reason I stayed with Netflix’s mail-at-home DVD service even when Walmart and Blockbuster came out with less expensive options), the inherent value of a link shortener is its shortness. So since the tinyurl.com domain uses 11 characters and bit.ly uses only 6, I made the switch.

First a little terminology lesson. “Bitly” is the name of the company. They call their shortened links “bitlinks” and the first part of the shortened link is “bit.ly”.

Creating a bitlink is very simple. Just go to bitly.com and enter the full URL in the box at the top right of the screen. 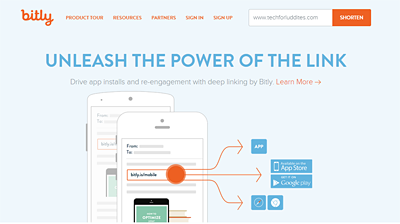 Click “Shorten” and you’ll be taken to a page with your new shorter URL. 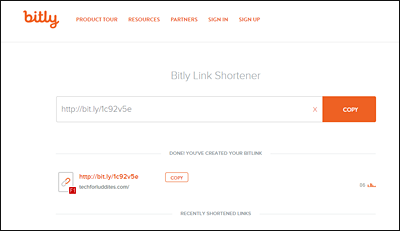 That’s it! Now just click the Copy button and then go to wherever you want to use it and paste it in.

Although one of the original big uses of bitlinks was to reduce the number of characters in a tweet, a change Twitter made some time ago actually eliminates that benefit. That’s because even though you might still see the bitlink in the tweet, behind the scenes Twitter converts all links using its own shortening service (t.co) and will count all links as 22 characters (23 if they use “https”).

A Few More Notes about Bitlinks 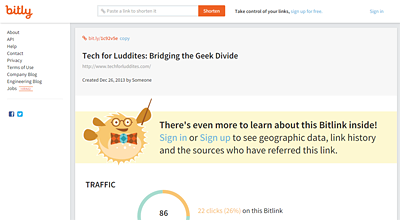 Do you use bitlinks or other URL shorteners a lot? If you have any tips you want to share, add them in the comments below!

Filed Under: Email, How To, Popular, Social Media, Twitter, Web Tagged With: Bitly