I had three potential titles for this post. The first was your basic “What is this post about?” one I ended up going with above.

The second was “Celebrities: They’re Just Like Us!” After I wrote about Hoda Kotb’s problem with her email after upgrading her iPhone to iOS 10, a few days ago I saw this tweet from Josh Charles (Dead Poets Society, Sports Night, The Good Wife, Masters of Sex…):

Quick help: someone sent me a gif that I want to save on my phone, but it keeps saving as a photo only. What am I doing wrong?

I wasn’t fast enough to reply to him before many of his other followers did, but that was partly because I wasn’t sure what he was talking about. I had my Galaxy S5 phone nearby and found a GIF and mailed it to myself and downloaded it and clicked on it and voila! A moving GIF.

So then I went and got my iPad mini and downloaded the GIF to it and clicked on it and… wha???

Which brings me to my third possible title for this post: “Why Do People Keep Insisting that iPhones Are Better than Androids?!”

If you want to actually confirm this to yourself before sending it (or you just want to look at it on your phone/tablet anytime you want), you can either install another app like GIF Viewer, or share the image to Mail and watch it play in the message body. 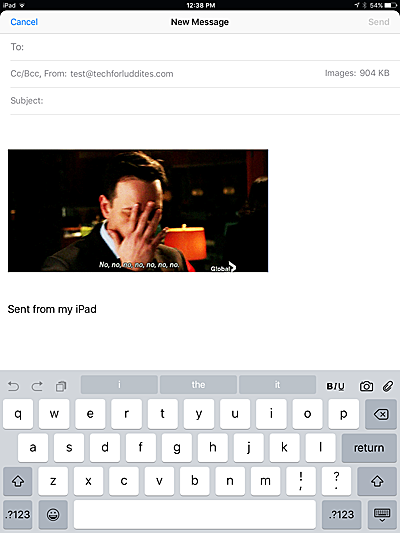 And that’s all there is to it… Special thanks to @MrJoshCharles for inspiring today’s post!

Stop the &%!*@# Ringer Message from Popping Up Over and Over Again on Your iPhone or iPad

Filed Under: Apple, Apps, Celebrities, Graphics, How To, iPad, iPhone Tagged With: Gif