NOTE: The information below relates to the Fire TV models available in the U.S. as of November 2020. Models available in other locations may differ in version, price, features, and supported content providers.

What is the Amazon Fire TV? 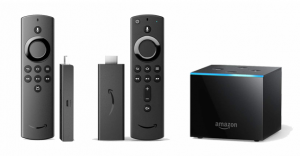 The Amazon Fire TV is the family name for the company’s line of streaming media players that take content from the Internet (videos, music, games, etc.) and display it on your TV. There are currently four models available: the Fire TV Stick Lite, Fire TV Stick, Fire TV Stick 4K, and Fire TV Cube.

NOTE: You can also buy Toshiba and Insignia TVs that have the Fire TV’s capabilities built into them.

Here are the main differences between the Fire TV models.

Compare the full tech specs of each model at Amazon. >>

What can you do with a Fire TV?

The Fire TV has thousands of apps that let you watch streaming videos, listen to music, play games, and more on your TV.

Watch Streaming Videos
Not surprisingly, the Fire TV is very tightly integrated with Amazon’s own streaming video service. But there are tons of other content providers that you can watch through it including most of the most popular ones: Netflix, Hulu, HBO GO/NOW, Sling TV, Playstation VUE, ESPN, Disney, PBS, and History. It does not have apps for Apple iTunes or Google Play videos and as of November 2020, NBC’s Peacock is not available, but apparently they are in negotiations and in the meantime you can sideload the app following the instructions in this TechHive article.

IMPORTANT: Buying an Amazon Fire TV does not give you access to the content you can watch on it, just like buying a TV does not give you access to cable TV shows. You need to have accounts with each streaming service that provides the content (some free, some paid) and/or subscribe to a cable/satellite package that gives you permission to access shows from specific networks through the Fire TV.

Listen to Streaming Audio
The Fire TV supports lots of music and audio apps as well, including their own Amazon Music and Audible services, as well as Pandora, Spotify, iHeart Radio, and Sirius XM, among others.

Play Games
There are free and paid games available for both devices, including highly popular ones like Crossy Road, Candy Crush Saga, and Minecraft. You can also purchase compatible controllers for use with games that require one.

Get Information
All models of the Fire TV come with Alexa, Amazon’s voice-activated, artificial intelligence software. In addition to letting you search for content to play on your Fire TV, Alexa can also give you news headlines, weather reports, sports scores, etc. as well as answer a variety of questions. Note that different devices may not all have the same capabilities.

Learn more about Alexa on the Amazon Fire TV. >>

If you don’t have the Fire TV Cube, you can pair your Fire TV box or stick with a compatible Amazon Alexa device for hands-free voice commands.

Learn more about how to use an Alexa device to control a Fire TV on the Amazon website. >>

There are services that stream live TV from various networks, but if you don’t want to add another monthly fee to your entertainment budget, you can use the Fire TV to watch and record live TV in conjunction with the Fire TV Recast and an HD antenna. (You can also use these with an Amazon Echo Show.)

Read the Fire TV Recast FAQ on the Amazon website. >>

I’ve had several of the earlier generations of the Fire TV box and stick models and have found all of them very reliable and easy to use. I haven’t tried the Fire TV Cube. The previous generation of the Cube didn’t receive very good reviews, but Amazon has a history of releasing first generations of their devices with lots of problems that are then fixed in the second generation, and it seems like that may be the case again here based on the current reviews.

I think if you’ve never used a streaming media player before, the Fire TV Sticks are great ones to start with as you get A LOT OF value for your money. The Cube is for people who want to have a single device to control their player, TV, and other compatible devices by voice.

Getting started with the Amazon Fire TV

The process for setting up the Fire TV models is basically the same as it is for any streaming media player:

Note: If you’re using the microphone button on your remote to use Alexa voice commands, have to hold the button until it makes a noise and then KEEP HOLDING IT while you say what you’re looking for or when asking a question.