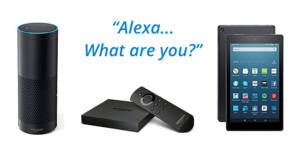 If you’ve seen Alec Baldwin order (what I assume are very expensive) socks by yelling across the room or watched a Mr. Robot character have deep philosophical discussions with no one else in the room, then you’ve seen Amazon Alexa in action. That doesn’t mean you’ve really understood what it is and I have to say that up to this point Amazon has not done a great job of explaining what it is and how it could help you. Enter Tech for Luddites. 🙂

What Is Amazon Alexa?

Alexa is voice-activated software. Think of it as Amazon’s version of Apple Siri, Google Now, and Microsoft Cortana.

The big difference between Alexa and the other three services, which is where the confusion lies, is that Alexa wasn’t introduced to the world as a feature that comes with a smartphone, something a lot of people already have and so could start using and seeing the value of right away.

Instead Alexa first hit the scene as a feature of the Amazon Echo, a new style of Bluetooth speaker the company introduced in November 2014. It’s the Echo that you see Alec Baldwin yelling at in those commercials. As long as it’s plugged in, it’s in listening mode, so you can issue commands or ask questions of it at any time from across the room.

Learn more about the Amazon Echo in this T4L post. >>

Since the Echo’s launch, Amazon has added Alexa’s capabilities to additional devices. The second generation of the Amazon Fire TV streaming media player, released in the fall of 2015, was the first of these. First it was added to the box model and shortly thereafter it became available for new Fire TV Sticks. Then in February 2016, Amazon released a software update for first generation versions of the Fire TV (box and stick) that added support for Alexa.

Learn more about the Amazon Fire TV and Fire TV Stick in this T4L post. >>

Next up, in March 2016, Amazon announced two brand new Alexa-enabled products that are variations on the original Echo: The Echo Dot and the Amazon Tap. 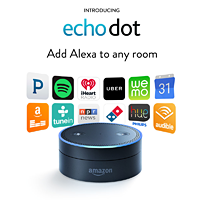 The Echo Dot looks like the top fourth of the full Echo device. It has a very basic built-in speaker for responding to questions, but it’s not really up to snuff for playing music. Instead, you can connect the Dot to proper speakers using Bluetooth or with a standard A/V cable. In September 2016, Amazon released a second-generation model of the Dot, primarily with better performance specs. 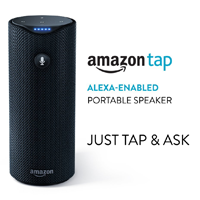 The Amazon Tap is a smaller and lighter version of the Echo, does have a music-capable built-in speaker, and has one major advantage over the original device: the Tap is battery powered so you can move it around without having to unplug it. However, unlike the Echo and the Echo Dot, it is not always listening so you have to press the microphone button on the player to talk to it. In 2017, Amazon announced that Taps would now have a hands-free option as well. If you already own a Tap, your device will get this feature with your next software-update (automatic, rolling out over a few weeks). Then you can turn it on in the Alexa app.

Learn more about the Amazon Fire family of tablets in this T4L post. >>

So basically, Alexa is a thing. 🙂 In fact, a number of news reports came out of the 2017 Computer Electronics Show in January declaring Alexa the big winner of the event.

What can you do with Alexa?

You can do a lot of things with an Alexa, but fundamentally it comes down to two basic capabilities—issue commands and ask questions—that powers all sorts of different applications. Here are a few of the most common uses but note that the number continues to grow every day.

Note: Not all capabilities are available for all devices. In general, Alexa provides more options for the Echo, Dot, and Tap than for the Fire TV players and Fire tablets.

Learn more about Alexa and compatible devices on the Amazon website. >>

Amazon Echo, Echo Dot, and Tap: What Are They and How Do They Work?

Amazon Fire TV: What Is It and How Does It Work?

The Benefits of Amazon Prime